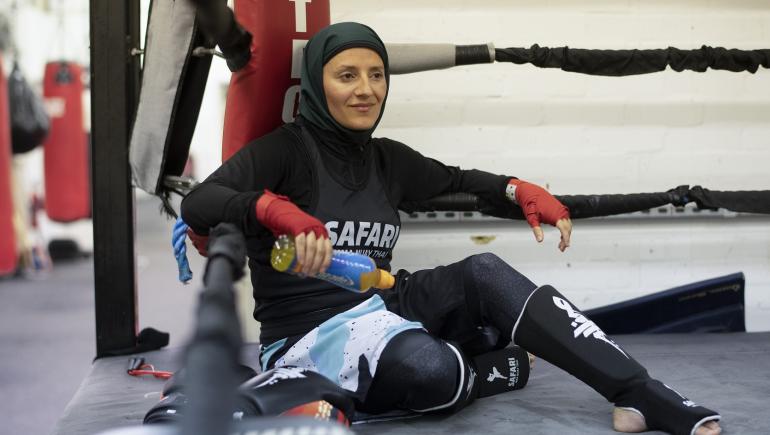 It was after converting to Islam in 2009 and needing to train alongside other women that Khadijah Safari founded the UK’s first female-only mixed martial arts (MMA) club. The club recently signed up to the free-to-join ConnectSport directory, so Emily Salley spoke to Khadijah about her journey, and found out how the pandemic restrictions have created some unexpected opportunities.

Over the past decade, Safari MMA has challenged the barriers which prevent women from participating in sport and its tireless founder Khadijah Safari has inspired women from different cultures and religious beliefs to engage with sport despite the obstacles in their way.

From the moment Safari MMA opened its doors back in 2010, Khadijah’s journey has been a learning curve as she has come to understand the types of challenges women face when entering sport depending on their cultural and religious backgrounds.

“For some people attending a first class in sports is an extremely difficult thing and there are loads of different reasons for that,” Khadijah explains. 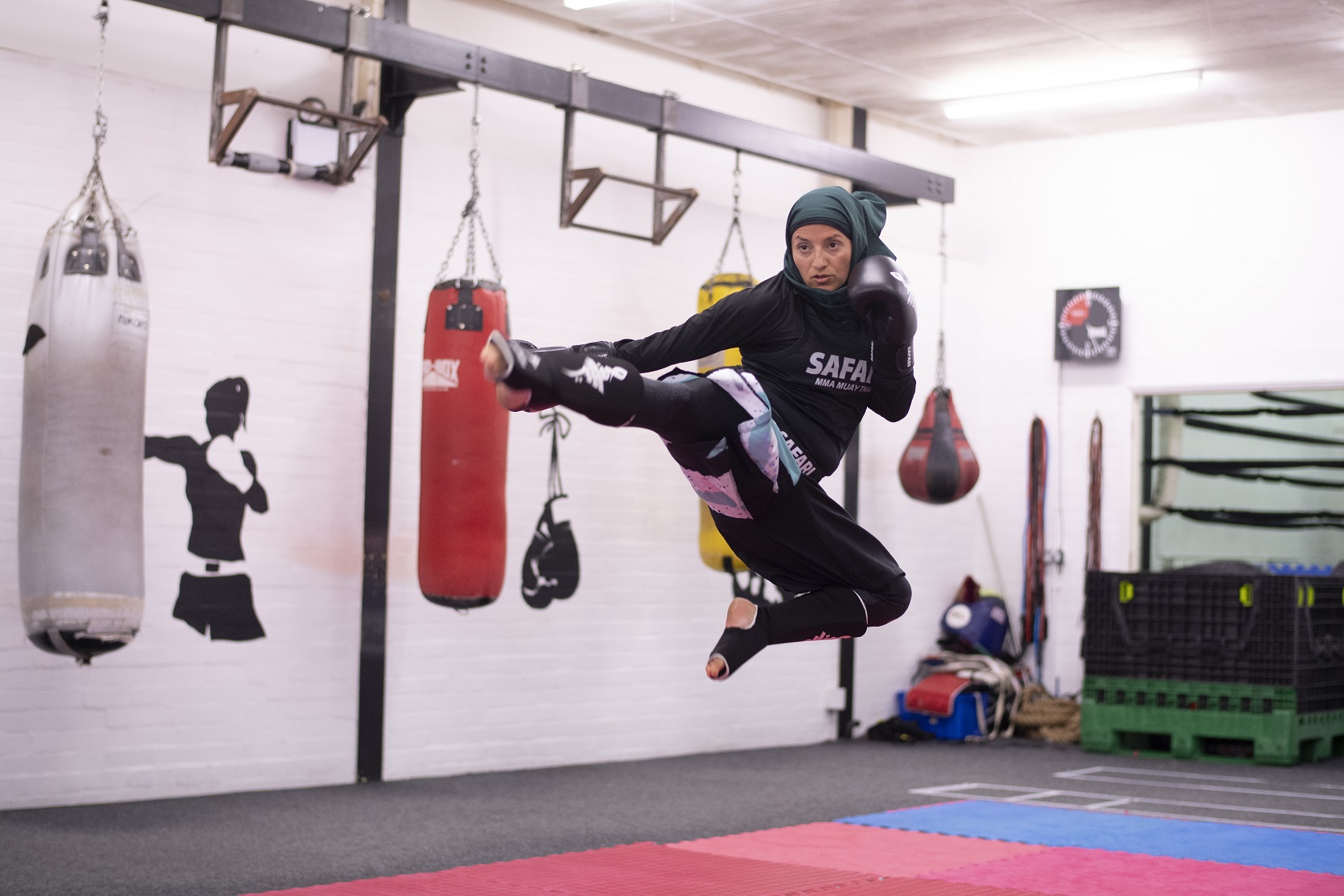 Lockdown forced Safari MMA’s sessions to move online but it also created an opportunity for learning more about the reasons which stop women from getting involved in sport.

“We’ve learned so much in such unfortunate circumstances,” Khadijah reflects.

After moving classes online, Khadijah realised that she only knew the people who were coming to Safari MMA for classes, not the women at home wishing that they could. “We opened up the doors to people who wouldn’t ordinarily come to a class,” she adds.

Online sessions will be a fixed feature for Safari MMA from now on, even when lockdown restrictions are eased, as Khadijah believes they could give women the confidence to take the first step and get involved.

She explains: “If we can give them four or eight weeks online training first in the comfort of their own home where they can see other people that will be in that class, they can have their camera switched off, they don't need to worry about what they’re wearing, or what they look like to get that confidence.”

The online sessions have also helped women’s families to see what martial arts and sport can offer.

“Families are often the barrier for them, thinking this isn't something that you should be doing.

“People see the sport quite often as a hobby and that's it. They don't see past that, the depths of it, the self-confidence and the mental and physical health aspects that you get from sport, and how it builds strength in the whole family.”

Working and communicating with families has become an important part of Safari MMA’s outreach work. They listen to women and their families in an attempt to understand what barriers exist and why, while also educating them on the benefits that sport can bring.

Talking about her personal journey, Khadijah explains how becoming Muslim completely changed her outlook. “I’ve been on both sides of the fence and so I didn’t understand the barriers at all,” she says.

It was not until Khadijah started mixing with women from different cultures and backgrounds at university that she realised many girls stop participating in sport when they reached puberty because of their families’ cultural beliefs that sport might not be suitable for women. 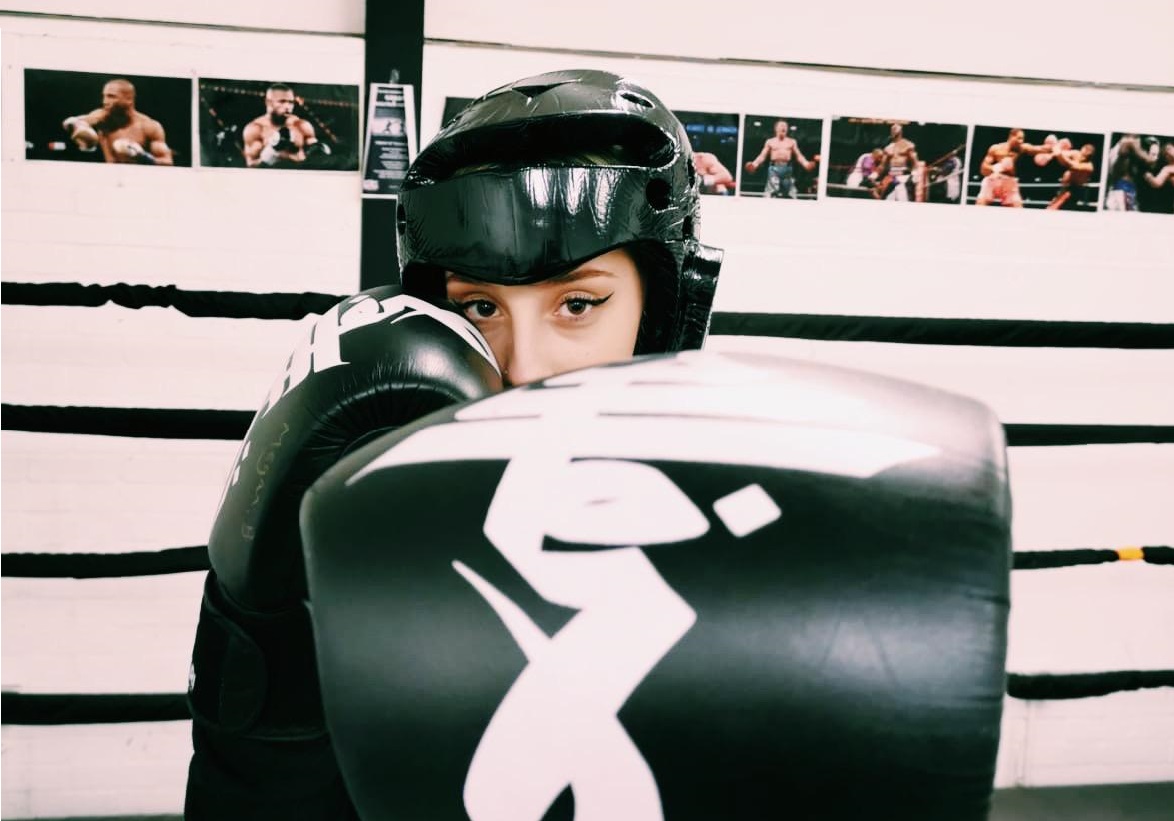 “They never see it as something which they’ll be able to do ever again,” she says. “These women that were coming to train with me had not done anything and they couldn’t believe there was actually something available for them.

“It’s learning about all of the aspects which are a barrier to taking that first step and providing an environment where they don’t need to worry about that,” Khadijah explains.

Another issue that prevents women from ethnic and religious minorities is the lack of representation, Khadijah believes.

“There’s not enough role models out there,” she says. “They look at advertising and they just don’t see themselves so they don’t see it as something that’s for them.”

The Safari MMA founder says that she has seen a shift in representation over the past 10 years but feels like the barriers faced by these groups need to be highlighted and talked about more so sport can become more inclusive in the future.

Inclusion is central to Khadijah’s work. She plans to develop training programmes for gyms and governing bodies across the UK which teach them about the various barriers encountered by people from different backgrounds. 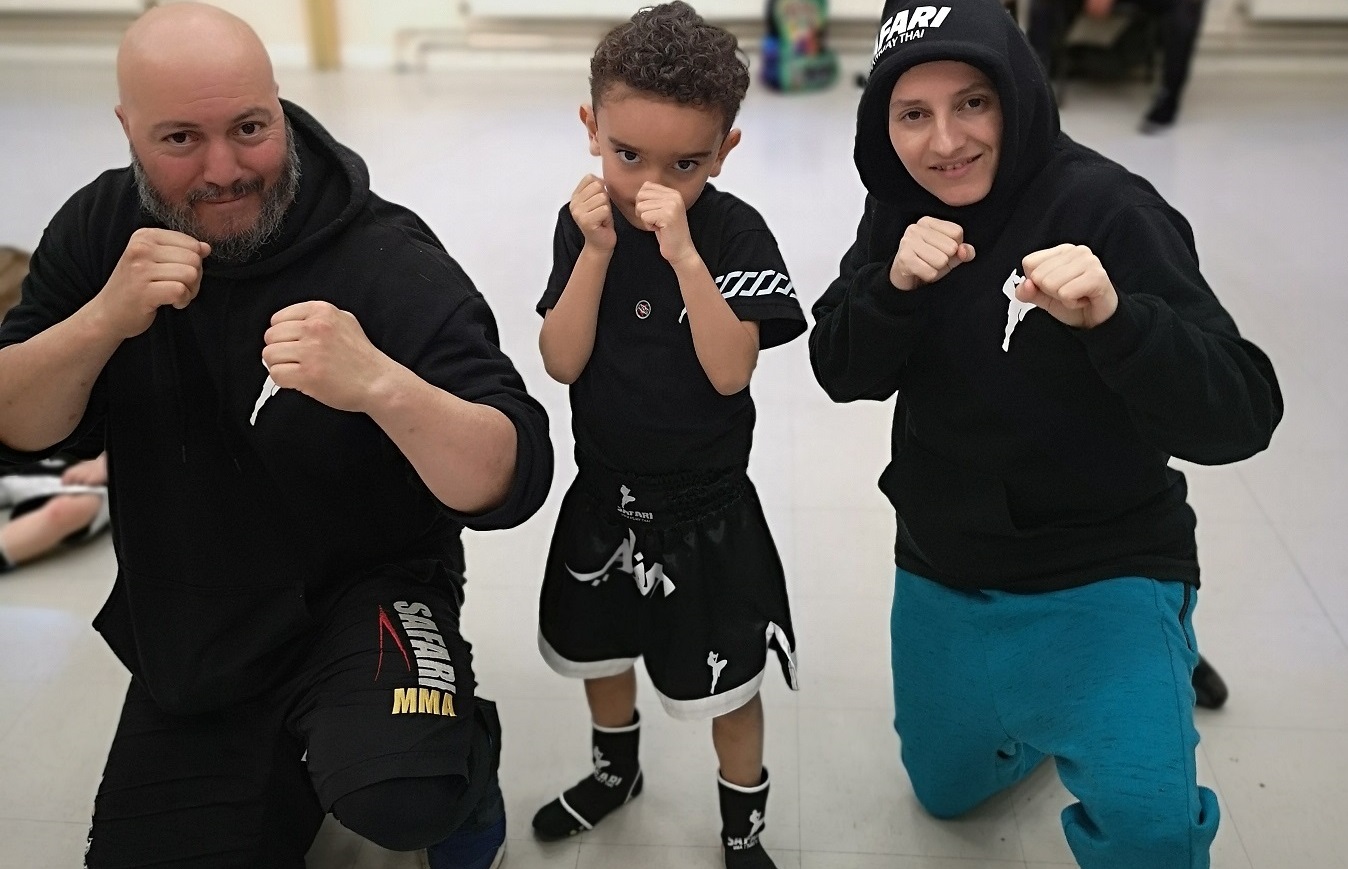 “It’s a whole package of information that needs to be learned as to what type of things make people - either from the same community or religious belief - uncomfortable and how those things could be adapted to help make them feel comfortable and want to take that first step.

“If you want to increase diversity and you do want to be more inclusive, then you’re going to need to consider what those barriers are.”

Khadijah’s latest venture is Safari Health Hub, an outreach programme which has just launched to encourage communities who would not normally get involved to engage in sport.

While Safari MMA concentrates on the sporting side of things, offering martial arts and fitness classes, Safari Health Hub will be working behind the scenes to change mindsets.

“It will hopefully branch out to try and educate other sporting organisations to learn what steps they need to make to be more inclusive.”

Making sport more inclusive isn’t just for the benefit of women from ethnic and religious minorities. Khadijah is a big believer that sport can help make society a better place. 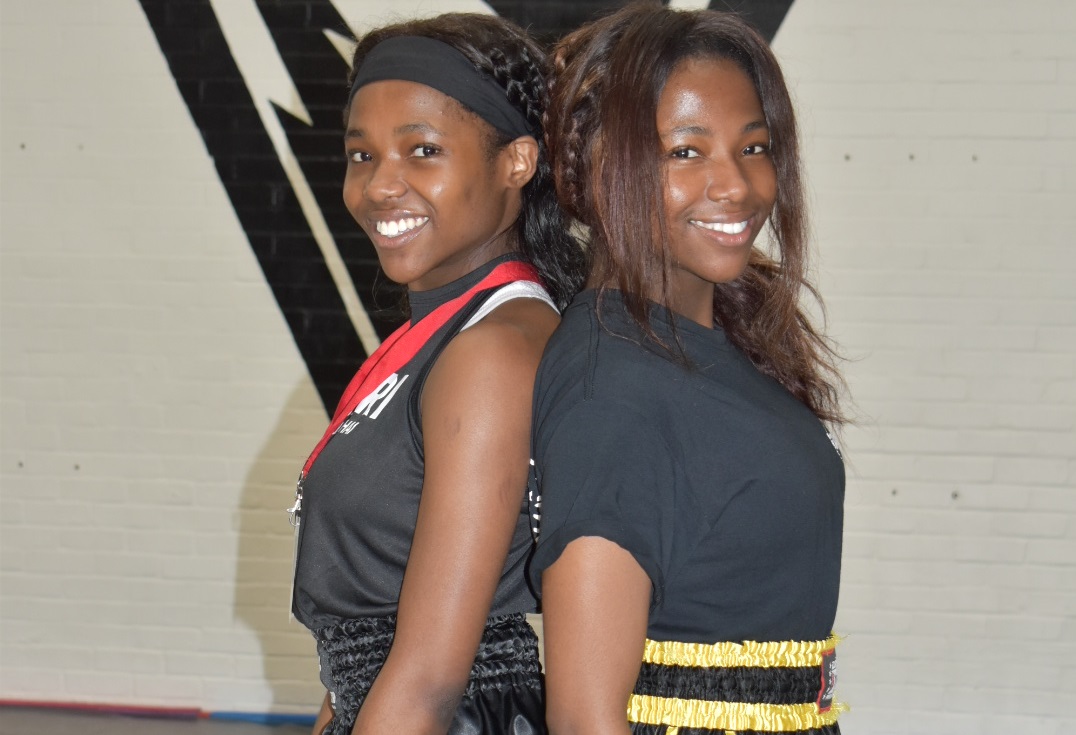 She explains: “If we can integrate all different cultures and backgrounds together in society, it just makes for a better, stronger society.”

Sport can be a vehicle for integration between different cultures and the only thing stopping this are people’s own, often unconscious prejudices as Khadijah knows only too well from her own experiences.

“Most people aren't ignorant out of bad intention,” she says. “It's just they have never had the opportunity to learn any other way.

“I was definitely one of those people. I was definitely ignorant. I definitely had prejudiced views and negative views on what I thought the Muslim community was like. Until you actually have the opportunity to integrate and learn about one another, you've got no reason not to have those views.

“But when you’re in a sporting place, none of those barriers exist.

“It doesn’t matter what you’re wearing, what you believe in, how much money you make or what your job is. None of those things are important and you become equal. 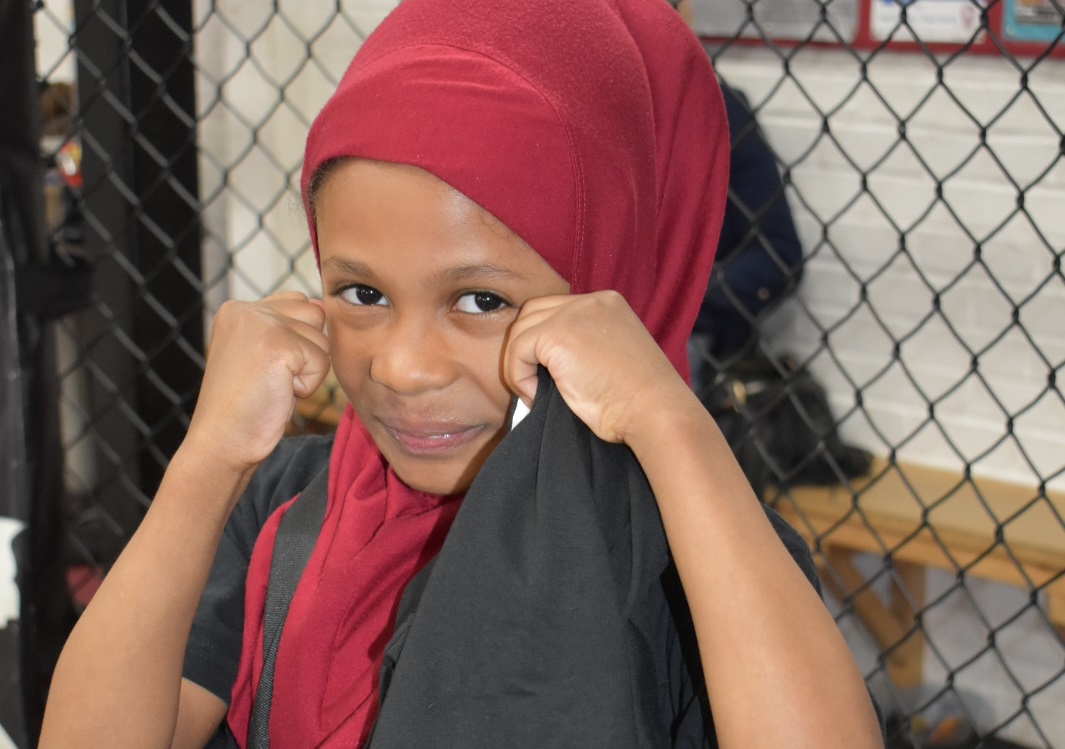 “I’ve only recently, over the past few years, learned about equity,” Khadijah says. “But what I didn’t understand was that for us to be equal, you may need to give some people an extra step in the first place so that they can have the equal opportunity that somebody else already has.

Safari MMA and Safari Health Hub are evidence of Khadijah’s hard work over the past decade to contribute to a more equal sports environment where everyone can participate. She has created a blueprint which other clubs, gyms and governing bodies can use to build those extra steps so that people can become equal in, and through sport.

Visit the Safari MMA page on the ConnectSport directory. To add your organisation for free, email hello@connectsport.co.uk.

Dallaglio: 'It's time to trust our young people'

Football Beyond Borders: Using football as a safety net
SIGN UP FOR THE CONNECTSPORT NEWSLETTER