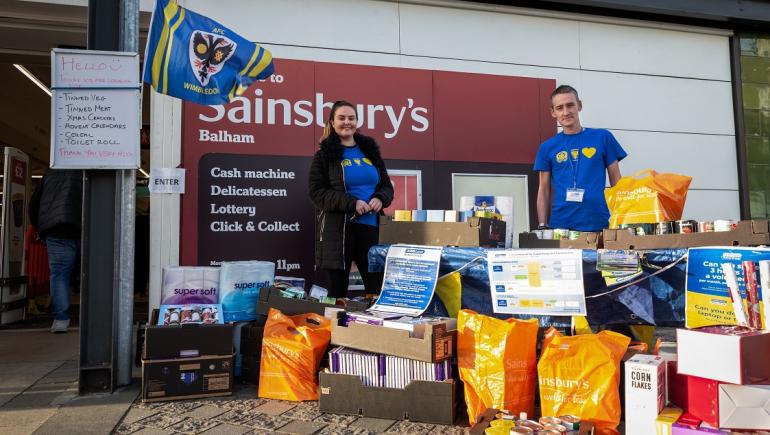 While most football fans will be familiar with the remarkable story of AFC Wimbledon, the club that rose again from the ashes, not so many will know about the remarkable work which has been carried out by an organised group of its fans over the last year. Sam Stephenson reports for ConnectSport on the incredible efforts of the ‘Dons Local Action’ group during 2020.

It started with a WhatsApp message sent by Xavier Wiggins – co-founder of the ‘Dons Local Action’ group – in March 2020. It was a message that kick-started a truly remarkable volunteering project.

“I sent a WhatsApp message to the group of volunteers and it just went from there,” he explains. “Three days later we had a table outside Morrisons in Wimbledon.

“We speak to shoppers on their way in and they put something on our table on their way out. We then take that back to a hub and turn that food into one-week food boxes which we send to the people who need us.”

Nine months later and the group have been responsible for 37,500 one-week food parcels and 91,000 food boxes to local organisations. This is on top of supplying over a thousand laptops and tablets.

And now, to cap it all off, they have just been awarded the ‘Sports for Social Change’ award for 2020 by the Sports Journalists Association and originally initiated in 2018 by ConnectSport, with other recipients including England footballer Marcus Rashford.

However, it was not a global pandemic that first brought this group of volunteers together. Instead it was a mission to preserve the very soul of their beloved football club.

Back in December 2019, AFC Wimbledon found themselves in a perilous financial situation. 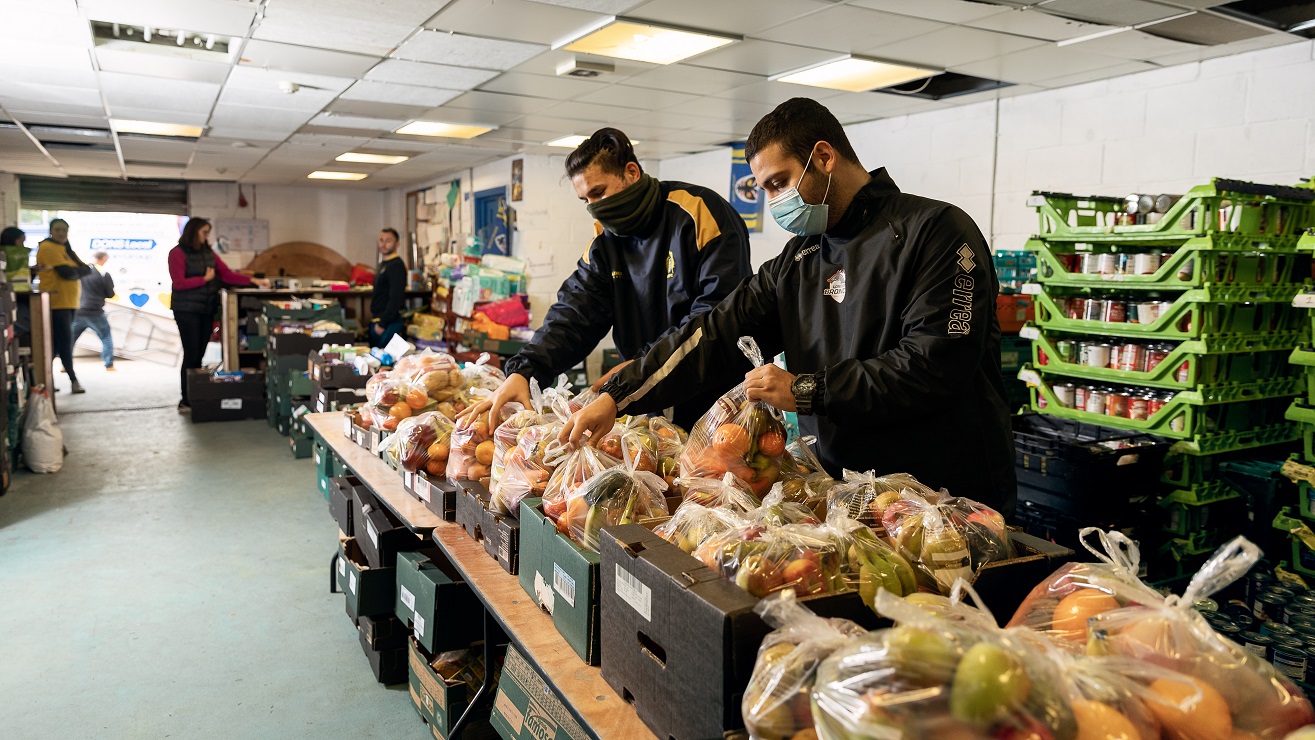 “We were presented with the fact that the football club was £11million short for completing the new stadium,” says Xavier.

“We were told that our only choice was to take outside investment – but that would have meant effectively losing fan control and fan ownership on day one which just wasn’t an option.”

Founded in the Fox and Grapes pub in Wimbledon on the back of the club’s relocation to Milton Keynes in 2002, AFC Wimbledon have enjoyed a meteoric rise up the divisions since.

But, with the move back to the location of the club’s old home ground Plough Lane, finances had been stretched to breaking point.

Suddenly fans were faced with the choice of either potentially losing the new ground or opening the club up to outside investment. To avoid either option, supporters had to bring in the money the old-fashioned way.

“A lot of the money was raised through people just simply standing outside train stations, leafletting door to door, that sort of thing, so we already had a big army of volunteers,” Xavier explains.

It was thanks to this army of volunteers that, with the club’s fortunes secure again, attention could turn to an even bigger threat.

When Covid-19 hit and lockdown came, Xavier and his fellow volunteers knew that such people power needed to be channelled into something far greater.

However the group are well aware that their transformation into such a volunteering machine would not have been possible without that link to the beautiful game. 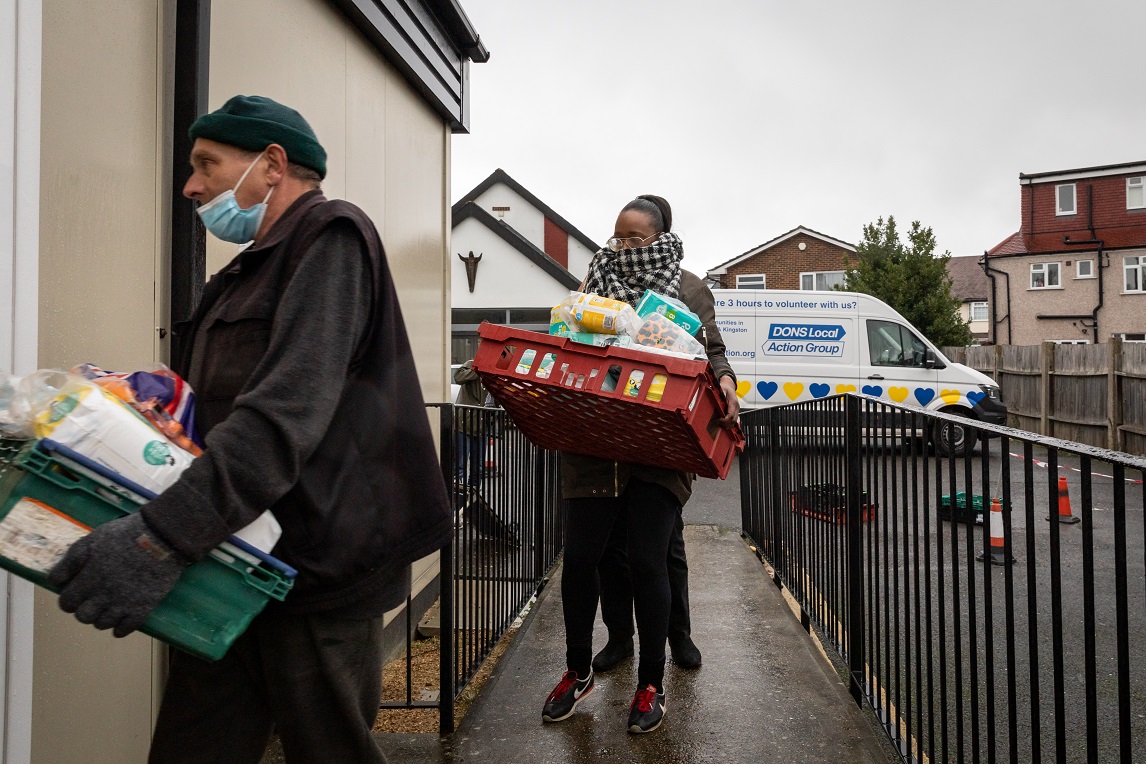 Xavier says: “I was saying to someone recently that we have 100 people delivering, driving and out on stalls and that’s just a normal Wednesday in December.

“Not to mention another bunch doing marketing and hotlines, getting more volunteers in behind the scenes. Would we have had that without football? I don’t know, because football gives it that impetus.

“There’s a really good network of football people making a massive difference, which is why football needs to be protected and cherished and every football club needs to take community work seriously.”

Thankfully for those in need in the areas they operate, the Dons Local Action group are not going anywhere, having now officially been made a permanent entity within the AFC Wimbledon Foundation, the club’s official community programme.

With further lockdowns potentially on the horizon, projects like this are becoming more essential than ever. But Xavier and the rest of the volunteers are not perturbed by such challenges.

“If you’re in poverty, you’re in poverty regardless if it’s Christmas or not. So, we just carry on and do as much as we can with the people that we’ve got, and we’re good at attracting volunteers.

“People like what we’re doing and the more volunteers we have the more people we can support. Whether we have 50, 500 or 5000 volunteers we just do as much as we can.

“At the end of the day we should not have food poverty in this country. There is no reason to have it, so we will do everything we can to help eradicate it.”

The story of ‘Dons Local Action’ could easily be the story of so many other charity projects with football at their heart. Yet it is still beautifully unique, born of this remarkable club that rose from the ashes.

Find out more at donslocalaction.org.

Why football is uniting to support Care Leavers

Safari MMA: Finding opportunity in adversity
SIGN UP FOR THE CONNECTSPORT NEWSLETTER