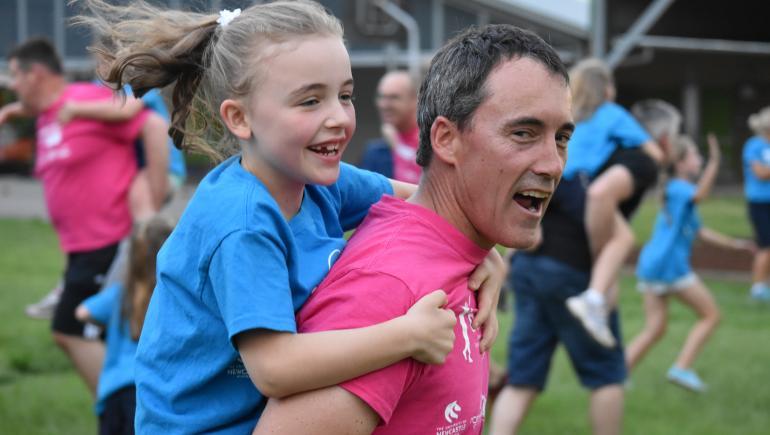 Ahead of the 2019 FIFA Women’s World Cup, Women in Sport has teamed up with the Fatherhood Institute, Fulham FC Foundation, the EFL Trust and the University of Newcastle, Australia, to highlight the important role father and father-figures play in getting their daughters physical active.

The programme is supported through National Lottery funding from Sport England and replicates an award-winning initiative designed and delivered by the University of Newcastle, Australia.

The video campaign showcases women who have been influenced by a father or father-figure in becoming physically active through football, including broadcaster Anne-Marie Batson, the niece of former West Brom footballer Brendon Batson, and Lucy Quinn, a current professional for Birmingham City Women FC. It also features stories from the daughters and dads participating in this new UK programme.

‘Daughters and Dads’ aims to increase physical activity levels, sports skills and social-emotional wellbeing of girls aged five to 11 years by challenging stereotypes about playing sport and physical activity and increase fathers’ confidence and ability to act as role models in relation to their daughter’s participation.

Heather Smith, Associate Head of Innovation at Women in Sport, said: “As we look forward to this exciting summer of women’s sport it’s great that we can recognise the fathers and father-figures around the country who are supporting their daughters to get active and develop a love for sport.

“Whether they’re raising the next Lioness or playing in the park, the activities that fathers do with their daughters have a positive effect on their physical and emotional development. These videos show us just how much girls relish the time they get to spend with their dads, stepdads, brothers, uncles and grandpas. They also demonstrate the lasting impact that these experiences have as they grow into successful women”.

Mike Diaper, Sport England’s Executive Director, added: “We know that we need to do more to help girls and families from lower socio-economic groups get active, and one thing that hinders this is outdated gender stereotypes that can cause families to believe that physical activity is less important for girls than boys. We also know that parents and carers often see their role as helpers and less as role models in encouraging their children to be active. The Daughters and Dads programme at the University of Newcastle (Australia) has addressed these challenges, and successfully increased levels of activity amongst families.

“At Sport England, we are delighted to be helping test if this successful model can be adapted to England to support us in our challenge to get more girls and families active through our National Lottery investment into Women in Sport who are working in partnership with the Fatherhood Institute, Fulham FC Foundation and the EFL Trust. We wish them all every success.”

Professor Philip Morgan from the University of Newcastle, Australia, commented: “The beauty of the Daughters and Dads programme is that fathers and daughters act as agents of change. It encourages fathers and father figures to play a greater role in supporting their daughters to develop physical confidence and competence, while at the same time helping daughters develop the social-emotional skills to optimise their self-esteem.”

To find out more, visit the Women in Sport page on the ConnectSport directory. To add your organisation to the directory, contact hello@connectsport.co.uk.

Kick It Out can help 'create sustainable change' - Chair