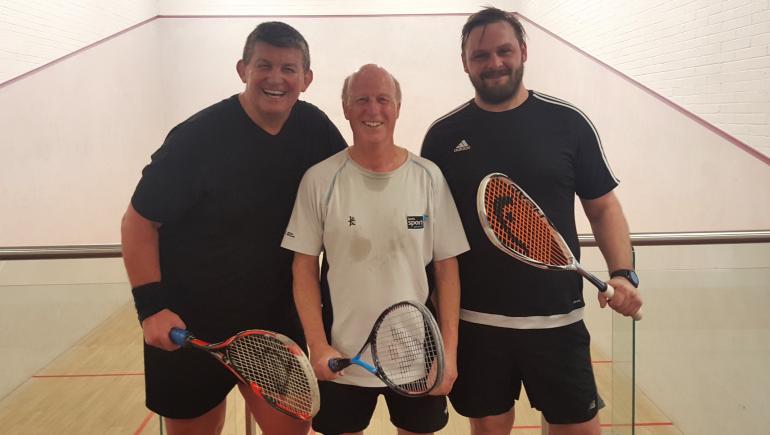 A group of older but innovative squash players in Hertfordshire have rekindled their playing careers by starting the UK's first Walking Squash league.

John O'Callaghan, 57, and his squash-playing friends at the University of Hertfordshire Sports Village suffered a succession of injuries which might have led others to give up the frenetic, fast-paced sport for good.

However, O'Callaghan devised a very simple set of rules which allow less mobile players to resume careers they thought might have been over.

Using a red dot ball, which is bouncier than the usual double yellow spot used in normal club squash, the revised format is essentially a cross-court length game. The ball is not allowed to bounce in front of the short line (i.e. in the front half of the court) and must bounce in the opponent's back quarter of the court.

The oldest player in the fledgling league is 66 and the five current league members have a combined age of over 260. Such has been the initial interest, O'Callaghan is already planning an expansion to three leagues of six. He says the average rally length is 15 shots.

O'Callaghan, who is director of the County Sports Partnership based next door to the university sports village, told ConnectSport: "Like most good ideas it's all about simplicity.

"It was meant to be non-competitive but it's the most competitive league I've ever played in in my life! It gives you a great work-out and you hit the ball a lot. Everybody who's played it likes it.

"It was born out of desperation really. We were all very enthusiastic squash players but one by one we all suffered injuries. I had my ankle fused and I basically can't run.

"As anyone who plays squash knows, once you play you just tend to love it, and we were all desperate to play again. As you get older, one little injury can rule you out. You may not think you'll get another chance, but this gives you one."

Mark Williams, Partnerships and Programmes Director at England Squash, commented: "This sounds like a great pilot and as far as I’m aware, it’s a first! It’s good to hear how a few simple adaptations can keep people on court and enjoying squash. I’m always very supportive of people making any changes that make the game work better for them – it’s all about having fun and keeping active after all!"

Nominate your Active School Hero
SIGN UP FOR THE CONNECTSPORT NEWSLETTER