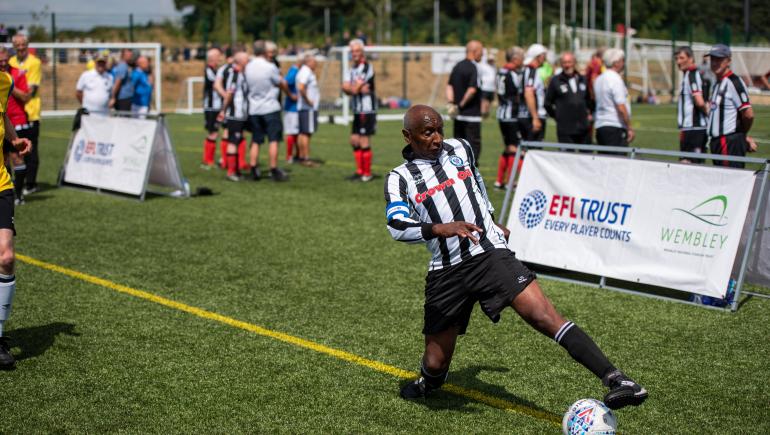 The fourth staging of a national walking football competition has helped thousands of men and women reap the sport's physical and mental benefits.

The EFL Trust Walking Football Cup has been running since 2015, with representatives from all 72 English Football League clubs and over 5,000 players taking part.

Aimed specifically at over 50-year-olds, most EFL clubs run regular walking football sessions with many participants reporting massive improvements in their health since taking part.

One of them is Grimsby Town captain Peter Cribbs, who highlighted how some of his team-mates have overcome mental and physical illness through walking football.

“For our generation to get to play at St George’s Park is amazing,” Cribbs said. “We have one participant who lost his wife and went into a very deep depression, doing nothing but looking at pictures of her.

“We persuaded him to come and join the group and he has now got a new lease of life thanks to walking football.

“We also have members suffering with cancer, or in remission, and walking football gives them hope and purpose, by meeting and socialising with friends old and new.”

Rochdale player Steve Colesby, 71, was also keen to point out the health benefits that walking football has given him, saying: “It is difficult, in a few words, to describe how much life has improved for me and many of my friends due to walking football with Rochdale AFC Community Sports Trust.

“My health and weight has improved due entirely to my involvement in walking football.”

Derby County player Frank Woodward also commented: “You can get forgotten about when you retire, so this is great.

“I would have gone on a downward spiral by losing all confidence, but instead I am really grateful for all the help and support I have received and look forward to everything that is coming up in the future.”

Sheffield United were victorious on the day, defeating Norwich City 1-0 in a nail-biting final to lift the fourth EFL Trust Walking Football Cup.

“We want to use the power of professional clubs to help grow the game and ensure these benefits are spread far and wide.”