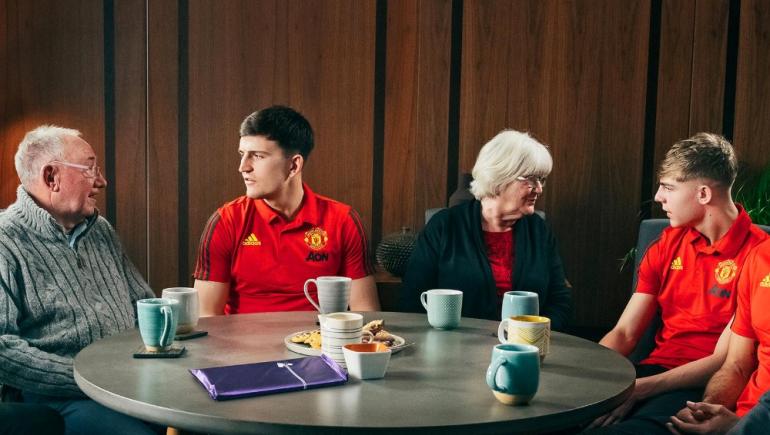 United back campaign to tackle loneliness

Manchester United are backing a campaign which aims to highlight the issue of loneliness amongst Britain’s older generation.

The Premier League club are supporting Cadbury’s 'Donate your words' campaign, with 11 'guests of honour' invited to meet and greet first-team players on the pitch ahead of last weekend’s match against Watford. The guests were all local United fans aged 65 and over who have experienced loneliness.

The gesture in front of a full house of 74,000 at Old Trafford aimed to serve as a reminder of the issue of loneliness which affects hundreds of thousands of older people living within Britain’s communities, and aims to inspire people to ‘Donate your words’  to those who need them the most.

The campaign comes following recent research, conducted by Cadbury and Age UK, which revealed that in a typical week, almost 2.6 million people aged 65 and over speak to three or fewer others, with more than 225,000 often going a week without speaking to anyone.

The survey found that simple, small gestures can play a part in helping to tackle loneliness as over six million older people claimed a few minutes of conversation would make a huge difference to their week. Older people said they would feel more confident to go outside their home, if they knew someone was smiling when in a queue, or if anyone had asked how their day was going.

Sean Jefferson, Director of Partnerships for Manchester United, said: “We’re pleased to start our partnership with Cadbury by supporting their ‘Donate your words’ campaign.

“The club is encouraging all fans to give a few moments of their time to speak to older people around them who might welcome a thoughtful conversation. Any small gesture and interaction can play a part in helping to help tackle loneliness amongst our older generation.”

Colin O’Toole, Associate Marketing Director at Cadbury, said: “We’re proud to announce this partnership with Manchester United and to continue supporting Age UK with our ‘Donate your words’ campaign.

“Loneliness is such a huge problem amongst the older generation, and we are encouraging Manchester United fans and the wider nation to engage with this cause by donating their words at every opportunity to lonely, older people in their communities. We are also looking forward to working with Manchester United in the future on further collaborations of this nature.”

For more information about the campaign and to get involved visit ageuk.org.uk/donateyourwords.