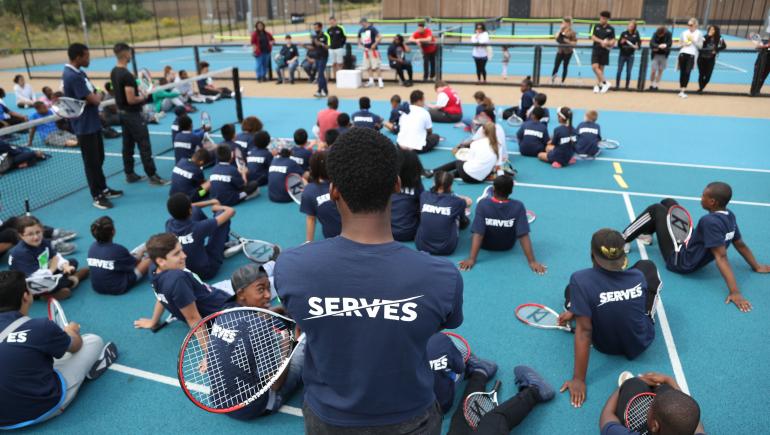 Tennis programmes up for diversity award

Three innovative projects which are supported by the Tennis Foundation’s SERVES programme are in contention for a prestigious award which aims to increase participation amongst black, Asian and minority ethnic communities.

The Al Madina Mosque in Barking, Bradford’s Sunnah Sports Academy) and SWAT Youth Club in Slough have been shortlisted in the Community Tennis Project of the Year category at this month’s 2018 British Ethnic Diversity Sports Awards (BEDSA).

They have been nominated after demonstrating a significant impact to increasing participation. SERVES, which uses pop-up and roll-out courts, also acts as a tool to drive social change and provide new opportunities to young people in urban and disadvantaged communities. The project itself has been shortlisted at the 2018 Sport Industry Awards.

The three programmes are:

Al Madina Barking Mosque (Barking Muslim Association Trust): SERVES sessions are delivered three times a week at Al Madina Mosque in Barking, attracting 22 young people to take part.  Tennis on the roll-out courts has since become a key component of Al Madina’s sports programme. By personally developing and supporting the youth engaging in the tennis programme, Al Madina aim to provide them with the confidence and ability to engage in positive activity within the community. They are now looking to identify individuals who can be developed and nurtured into future leaders and deliverers of the SERVES Programme.

Sunnah Sports Academy (Bradford): Within the first week of delivery of SERVES sessions at Sunnah Sports Academy last summer, 60 children were taking part in the project. Such is the demand that organisers have had to put more sessions on, while they have also taken the project into local schools. Working predominantly in the South Asian community, the sessions include children with and without disabilities – including one young boy with autism who previously had not taken part in other sports.

SWAT Youth Club (Slough): Having introduced the SERVES programme in October, SWAT have seen their new Sikh faith voluntary run youth club develop much quicker than anticipated, with both youths and volunteers enjoying tennis on a weekly basis. SWAT have found SERVES to be a great way for young people to maintain health, fitness and agility, while the team have witness social and psychological benefits.

Voting is open until March 15 with the winner being revealed at the BEDSA ceremony at Grosvenor House, Park Lane on March 24. To find out more about the awards visit the website.

Read more about the Tennis Foundation by visiting the ConnectSport directory.