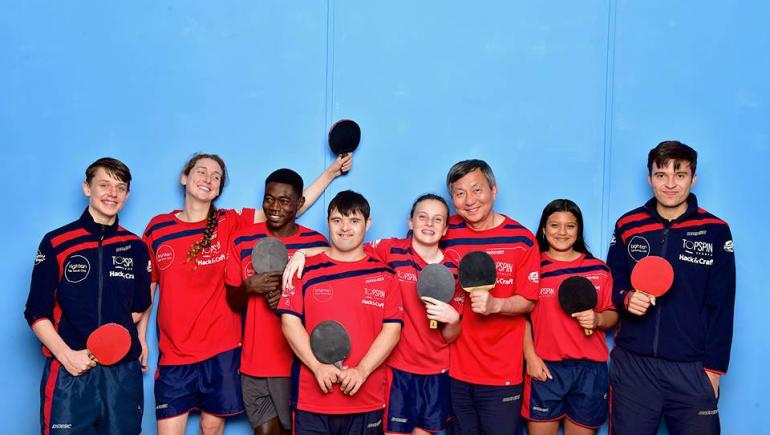 Brighton Table Tennis Club has been crowned the UK’s best sports club at the Daily Mirror Pride of Sport Awards.

Paralympic champion Will Bayley and tennis ace Johanna Konta presented the award at the ceremony in London.

Club co-founder Tim Holtam and Harry Fairchild, a table tennis coach with Down’s Syndrome from the club, were among the delegation on stage to receive the award.

Tim founded the club along with Harry McCarney and Wen Wei Xu in 2007 after approaching Brighton Youth Centre to ask about setting up their own table tennis club.

They were given a room upstairs for a year for free and invited children to their first session using two worn-out tables.

More than a decade later, the club now engages with more than 1,500 people from all backgrounds and ages in 70 weekly sessions. Its youngest player is just two and the oldest, 98.

Tim told prideofsportawards.co.uk: “It’s a club of sanctuary for everyone, a place to come and hopefully feel more positive.

As well as running a dedicated centre in Kemptown, the club also runs 100 tables across the city in parks, squares, schools, prisons, sheltered housing schemes, a centre for homeless people and a psychiatric hospital.

In 2016 it became the UK’s first Club of Sanctuary for its work with refugees and asylum seekers. The award recognised its work providing table tennis lessons to 80 unaccompanied refugee children from Afghanistan, Eritrea, Iran, Iraq, Kurdistan, Algeria and Vietnam.

Other Pride of Sport Award winners in the ‘Special Recognition’ category included Eddie Brocklesby (above), the founder of Silverfit which promotes healthier ageing through physical activity, and Corinne Hutton, who created the charity ‘Finding Your Feet’ after losing her hands and feet to Sepsis in 2013.

Read more about the Daily Mirror 'Pride of Sport' Awards.

The F Word: Can you learn from failure?
SIGN UP FOR THE CONNECTSPORT NEWSLETTER