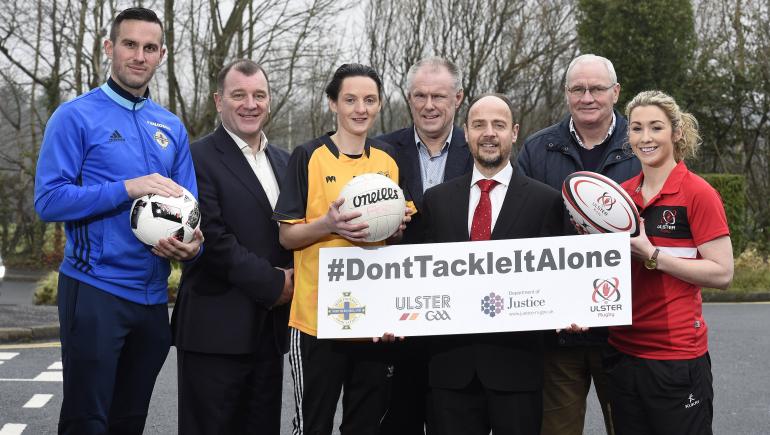 Three sport governing bodies have joined forces as part of a campaign to tackle domestic abuse and violence.

The Irish FA, Ulster Gaelic Athletic Association and Ulster Rugby have all given their support to the Northern Irish Department of Justice's 'Don't Tackle It Alone' initiative that will be seen by tens of thousands of spectators over the next few months.

The programme of education and participation is designed to encourage anyone who has concerns to seek help and report domestic abuse.

Campaign messages will be featured in matchday programmes and will be played on video screens at pitch-side. Players will be adding their personal support in a number of ways including wearing warm up t-shirts featuring the campaign strapline and using the hashtag #DontTackleItAlone.

The campaign began on Friday, February 9 at Ulster Rugby's Pro 14 fixture against Southern Kings at the Kingspan Stadium.

Shane Logan, Chief Executive of Ulster Rugby, said: "Ulster Rugby is fully behind this important initiative, which raises awareness of domestic abuse and offers encouragement to victims to seek support.

“I commend the Department of Justice on this programme and I’m pleased that Ulster Rugby, Ulster GAA and the Irish FA can assist in its delivery.”

Anthony Harbinson, DoJ Head of Community Safety Division, commented: “Domestic violence is a crime. Over 29,000 incidents of violence and abuse took place in our cities, towns and rural areas last year.  The first step for a man, woman or child in seeking help can be the most difficult.

“Domestic violence and abuse, which often features sexual abuse, is significantly under reported. Tackling it is everyone’s responsibility and we are delighted to be working in partnership with Irish FA, UGAA, and Ulster Rugby to raise awareness and to deliver a clear message that anyone who thinks they or someone they know is being abused don’t have to tackle it alone.”