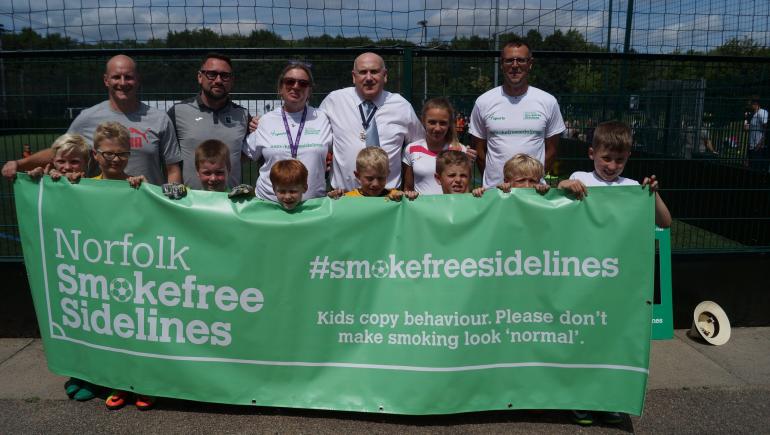 The first year of a campaign to de-normalise smoking for children by banning it from touchlines at community football matches has been rated as a great success.

The Smokefree Sidelines campaign was launched in Norfolk just over a year ago by NHS Norwich CCG, and was supported by the Norfolk Football Association.

Thirty youth football clubs, with a total of 1200 young players between them, signed up to the scheme across the county. It was recently adopted by East Riding FA for the forthcoming 2018/19 season, meaning touchlines at youth football matches across Hull will also become smoke free.An evaluation of the Norfolk campaign by researchers from the University of East Anglia (UEA) found it demonstrated “a small but important change in observations of smoking".

Their report added: "This suggests a successful and positive move towards the denormalisation of smoking at youth football games. There was strong support from parents and coaches for not smoking on the sidelines.”

Rebecca Burton, Marketing and Communications Manager at Norfolk County FA said: “It’s been great to be part of the development and implementation of the #smokefreesidelines campaign and I’m thrilled that it’s now beginning to spread out of Norfolk to other areas of the country.

“The evaluation from UEA has delivered some extremely positive news surrounding not only the perceptions of coaches and parents regarding the impact of the initiative on their players but also a wider acknowledgement of the influence of coaches and adults as role models to children.”

When local youth football clubs join the campaign, they can obtain banners, posters, flags and pitch-side tape to remind everyone that no-one should smoke in front of the kids on the pitch.

This means parents and visitors are asked to refrain from smoking on playing fields and especially the pitch side lines.
The evaluation report also stated: “There is consensus that changing social smoking norms helps positively influence children’s decisions not to start smoking. Sport provides an opportunity to be an exemplar for health behaviours and may represent a ‘credible source’ demonstrating positive health messages to young people.”

The UEA report's future recommendations include further investigations into a nationwide ban on smoking at youth football and a roll-out of #smokefreesidelines to other sports such as cricket and hockey.