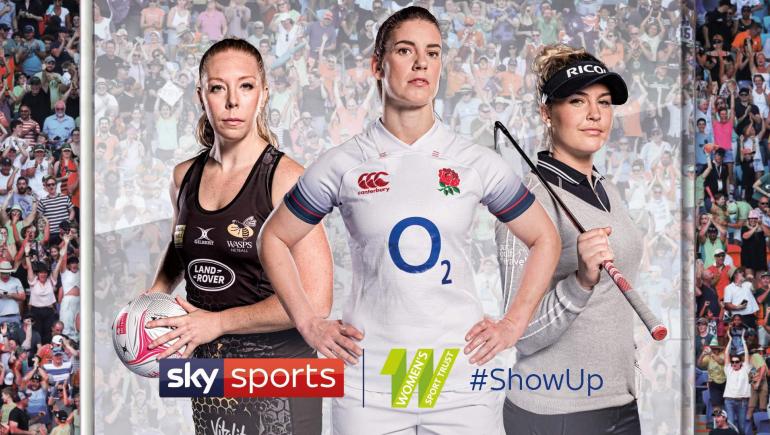 The #ShowUp campaign, launched this week by Women's Sports Trust and Sky Sports, aims to build more consistent support for women's sport by getting people to watch, attend and play.

Champagne moments such as England's sensational Women's Cricket World Cup victory and England's last-second win over Australia in the Commonwealth Games netball final have boosted the profile of women's sport periodically, but the objective of #ShowUp is to build support and participation for the long term.

Sky VIP are giving away over 5,000 free tickets to major women's sports events, and women and girls are being encouraged to attend and participate in local women's sport throughout the summer.

Tamsin Greenaway, former England netball star and Head Coach of Superleague champions Wasps, is an ambassador for the campaign.

She said: "We need to take the first steps to creating a change in culture that places women's sport at the heart of people's lives.

"I was reading recently about the ways in which young girls become disengaged with sport – if they aren't involved in an active way by the age of eight or nine they can lose interest in following sport altogether.

"This is about taking an initial step towards building a culture in which that happens less. We need to help more people to engage with women's sport and support their kids in doing so.

"Women's sport is on a journey and has made great strides – but there's still so far to go. Things will not change overnight, but #ShowUp is hopefully a first step in causing a shift in our culture."

Olympic gold medallist hockey player Kate Richardson-Walsh tweeted: "I watch sport because I love the story, watching the skills, the desire to win, the elation in succeeding and the devastation in losing. There is a power, strength and emotion that is magnetic to me. To see all this and more, we all need to #showup to watch, play and support."

Find out more about the campaign here.

Sport for Development: UN calls for 'further co-ordination'
SIGN UP FOR THE CONNECTSPORT NEWSLETTER