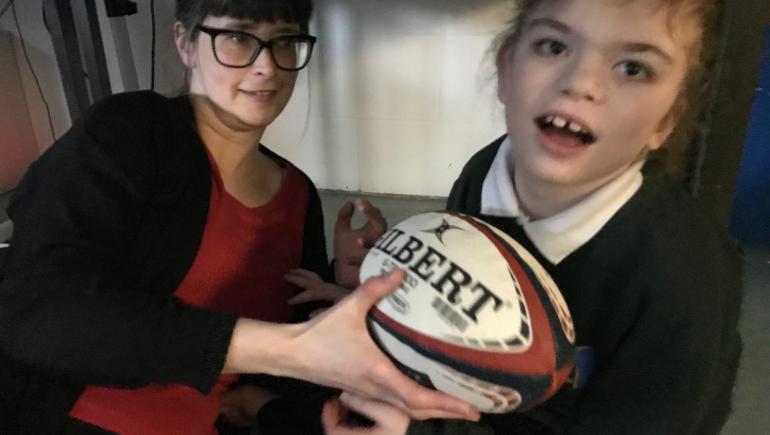 The concept has been adapted from the work of one of the Foundation's specialist support workers, Claire Tavender-King, who used special techniques to teach young people with visual impairments about the concept of colours.

That sparked the idea of creating immersive and meaningful sensory sporting experiences – both participating and supporting a team – through touch, audio and visual stimulus.

Programme manager Kris Tavender explained to ConnectSport: "In basketball, for example, the teams come out, there's the tip-off, players aggressively contesting for the ball, dribbling, shooting and the euphoria of celebrating. We identified how we could translate each of those elements to our service users.

"We attached physical actions or objects to each of those elements. At a basic level, that could be holding and getting used to the ball, progressing to elongating the arms to stretch for the ball, then the higher cognitive understanding of physically competing by almost wrestling for the ball.

"In addition to that we have the sounds of a match, with silence followed by the lights and noise of celebrating. Repetition of that ebb and flow structure created a sense of familiarity with the children."

The young people have a wide range of disabilities, from severe autism and learning difficulties to trouble with sensory processing, physical and visual impairments, and being non-verbal.

"Consistent development of their engagement and interaction has really helped them," says Tavender, who was voted Community Coach of the Year at last July's Premiership Rugby Parliamentary Community Awards at the House of Commons.

"They are now anticipating what's coming next or repeating activities from the week before without prompting. It is so encouraging when we see them start to respond in that way. You can really see the impact.

"With one girl, we initially struggled with her engagement lasting more than 10 or 12 minutes because she exceeded her capacity to interact and got very riled and upset. But this week, she lasted the entire 40-minute session and she absolutely loved it. For the staff, the service user and ourselves, that's a lush moment of togetherness.

"Overall, we want them to experience rugby, basketball or football in a way that has tangible meaning for them. By working with them on a one-to-one basis they can engage and access sport at a truly independent and accessible level."

The programme is to extend from the two groups at New Fosseway School into a third group at nearby Claremont School after Easter. The plan is to then bring all three groups together for a special festival at Bristol City's Ashton Gate stadium in May, to allow them to experience the concept of one huge game together, as participants and fans.

Sensory Sport Sensations is part of the Spectrum Project, which targets service users with special educational needs and disabilities across Bristol and South Gloucestershire. It is delivered in partnership with Premier Rugby Limited and England Rugby.

The programme requires three special sports packs costing close to £500 each. The Spectrum Project's end goal is to ensure every special school and disability school in Bristol have a pack of their own and be able to roll out the programme internally, complemented by the specialist support of Bristol Rugby Community Foundation's inclusive team.

For further information on the programme or to sponsor a trio of kit bags for one school contact ktavender@bristolrugby.co.uk