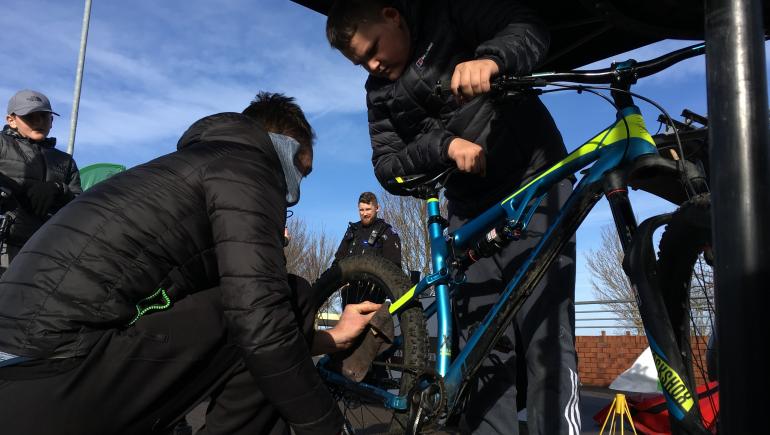 Police have taken a proactive step to combat anti-social behaviour at a trouble spot in Bristol – by fixing youngsters' bikes and organising races.

Retailers, employees and customers had reported "appalling and intimidating behaviour and language" to Avon and Somerset Police over a number of weeks at a shopping centre in the Hartcliffe area of the city.

In response to the complaints, local police officers took an unconventional approach by partnering with cycle coaching organisation Sole Cycling to offer assault courses, velodrome races and track stand competitions in the Morrisons car park where many of the incidents occurred. Sole Cycling's Bike Doctor was also on hand to fix and fine-tune young people's bicycles for free.

Sole Cycling's Marc Molloy told ConnectSport: "The opportunity to come and ride on a closed-road facility, with full tuition, and the chance to get their bikes fixed for free by our qualified mechanic was really special for these families. It also gave the police a good way to meet some of the local kids, their families and start a dialogue with many of them for the first time.

"We’ve been delivering community sport for 11 years now and have been fortunate to win a few awards for various projects. We’ve worked with the police during evenings, weekends and holidays for a long time and had some really positive results, including a reduction in crime and anti-social behaviour to zero in certain targeted areas, a cited increase in interaction between the police and local families and a sustained fall in the number of children on anti-social behaviour contracts.

"This project in Hartcliffe was the first of a number of interactions planned between us and communities across Bristol, including Easter and Summer holiday programmes as well as targeted sessions leading up to summer, involving young people, learning how to fix bikes and then being given a bike to keep on completion from the lost/confiscated police stores."

Neighbourhood Sergeant Carlone Crane added: "Morrison’s car park is an area where anti-social behaviour tends to flare up, so we thought we would get on the front foot and offer kids something fun and challenging to do, instead of causing trouble."

Sport for Development: UN calls for 'further co-ordination'
SIGN UP FOR THE CONNECTSPORT NEWSLETTER