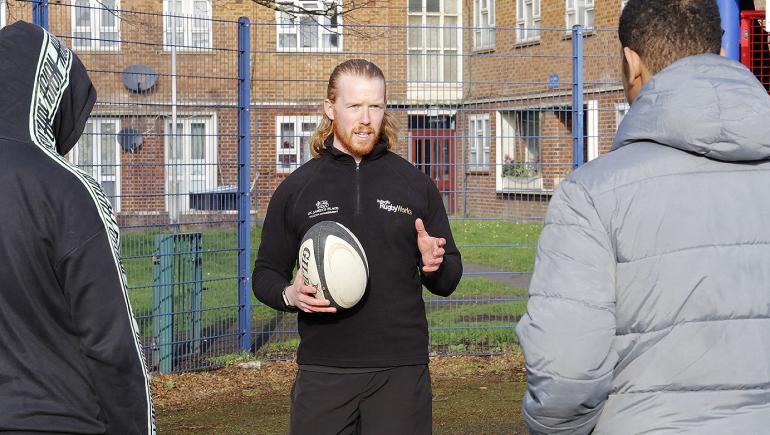 Dallaglio RugbyWorks have partnered with ukactive joined to launch ‘Open Doors’, a new programme to support young Londoners at risk of falling into anti-social behaviour, by providing activity in schools during half-term.

Following a successful pilot, ukactive has been awarded a second grant by the GLA (Greater London Authority) which will be used to unlock school facilities outside of term time, using a sport and mentoring-based programme to engage young people and to reduce youth violence and crime.

The programme will be delivered in partnership with RugbyWorks, the charity founded by Lawrence Dallaglio, and will take place during February half-term at a school in Sutton which is opening its doors to act as a community hub for the week.

The aim is to use the power of sport to show the young people who attend that they all have the power to choose where they go in their lives, and provide them with the tools and confidence to make the right choices.

As part of their training, the mentors and coaches on the programme have received mental health training from experts at the charity Mind.

Rachel Roxburgh, CEO of Dallaglio RugbyWorks, said: “We’re pleased to be working alongside ukactive on the Open Doors programme again, to provide an exciting and much needed, opportunity for the young people we support in Sutton.

“Our mission as a charity is to ensure that we support marginalised young people who are at risk of being left behind by society, into sustained education, employment or training, and to reduce the chances of them being involved in violence or criminal activity.”

Open Doors forms part of ukactive’s wider policy call for Government to invest in its ‘Schools as Community Hubs’ model, unlocking school facilities outside of the school day to support young people.

Jack Shakespeare, Director of Children, Young People, Families and Research at ukactive, said: “Programmes such as this are crucial for engaging vulnerable young people during the school holidays.

“Between 2013/14 and 2017/18 there was a 57% increase in youth violence and, with cuts to youth services, we are seeing young people and their communities suffer as a consequence.

“These statistics show how important early intervention is, and through programmes like Open Doors our sector has a key role to play in helping to tackle this issue.

“By unlocking schools and using them as community hubs, together we can host fun and rewarding activities for children and young people from all backgrounds, helping to improve their outlook as well as their mental and physical health.”