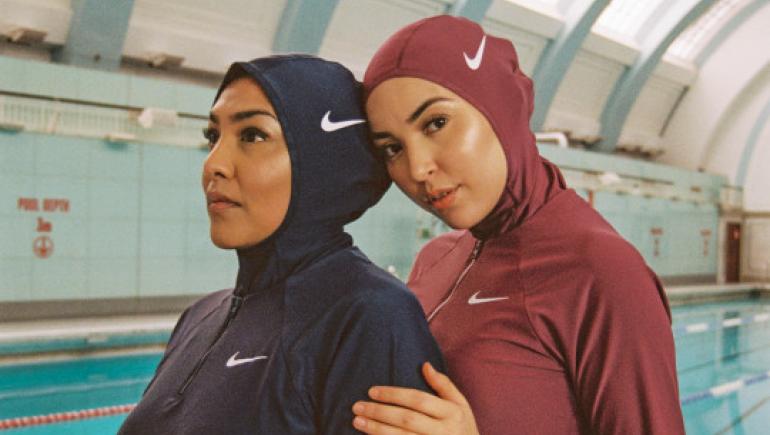 The global sportswear brand Nike has unveiled two more important initiatives aimed at driving gender equality in and through sport this month.

Firstly, the London non-profit organisation ‘Girls United’ featured in a powerful new film supported by Nike showcasing ‘The Architects of New Football’ around the world, and secondly, the brand has unveiled its new modest performance swimwear collection.

Nike Swim’s new collection aims to improve diversity and inclusion in the sport. The Victory 2.0 collection – which includes tunic tops, swim leggings and a hijab that can be mixed and matched for women seeking full coverage – aims to help reverse the trend which sees one in four Black children leaving primary school not knowing how to swim.

Nike Swim worked with Muslim Sisterhood to create campaign imagery and to get their feedback on what makes a product inclusive.

“Swimming is often an activity that Muslim women are excluded from because of our modesty requirements, so we wanted to create a campaign that was inclusive of different ages and shows that anyone can swim and enjoy the water,” said Lamisa from Muslim Sisterhood, in comments reported by the Metro this week.

“I’ve never really learnt how to swim because of not ever having the right swimwear and it’s something that’s held me back from enjoying the water. Having swimwear that meets your needs personally as well as on a practical and technical level is encouraging. It makes staying active and having fun easier.”

Meanwhile Nike is also behind a compelling documentary ‘The Architects of New Football’, filmed in cities around the world, which showcases the power of football to not only bring communities together, but to build them in the first place.

In the film Romina Calatayud, the founder of Girls United Football Association, explained: “We want the girls to feel like they can be themselves, first and foremost, like they have a space where they can make mistakes and that’s okay. The coaches are role models for the girls. It’s about being someone they respect, and that they look up to and that they are inspired by.”

Girls United, which is based in the UK and Mexico, recently published its annual impact report which demonstrates the amazing work of the organisation – even through the Covid-19 pandemic.