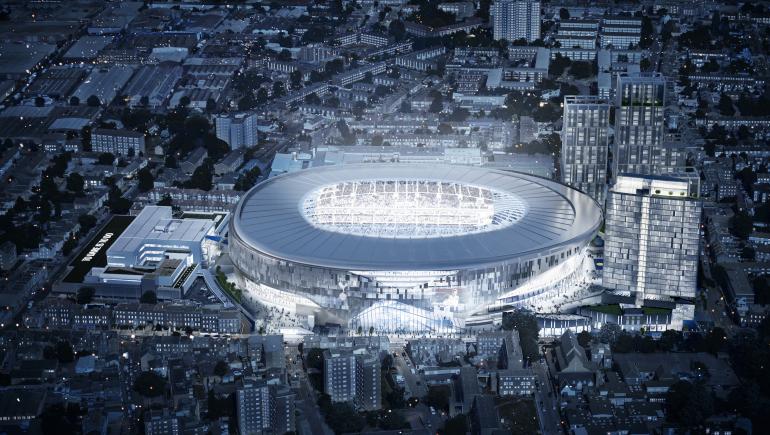 It’s an exciting time to be a Spurs fan, with one of the brightest young managers and most talented squads in the Premier League, plus a new 61,000 stadium due to open in time for the 2018-19 season. Simon Lansley speaks to the Chief Executive of the Tottenham Hotspur Foundation about what this means for the club’s community work.

As you approach Spurs’ famous old White Hart Lane stadium, the slogans on the boards screening the building work repeatedly scream ‘Passionate about Tottenham’. Not unusual, you might think, for a Premier League football club to be shouting about their brand in front of the local community.

That is until, you realise, they are simultaneously referring to the local community.

Next season Spurs will play their Champions League games at Wembley and, during the 2017-18 season, have the option to stage both domestic and European matches at the national stadium, as their iconic old ground is transformed into a state-of-the-art 61,000 all-seater stadium.

As part of the preparations, next summer the club’s award-winning charitable Foundation will move into a new ‘hub’ in a Grade II listed restored residential townhouse on Tottenham High Road, bought and donated by the football club and refurbished with a grant from the Heritage Lottery Fund. According to Grant Cornwell MBE, Chief Executive of the Spurs Foundation, this will serve two purposes – firstly, to provide more ‘walk-in’ access to the Foundation’s services, and secondly to demonstrate that, while the first team may be temporarily based elsewhere, the club’s phenomenal community work is unwavering in its commitment to the people of Tottenham.

The new stadium is being seen as the catalyst for the regeneration of east Haringey and south Enfield, with the Foundation’s impact across nine wards reported in a ‘social audit’ published by the social impact research company ‘Substance’ in late 2015 – itself a first for a Premier League club’s charitable foundation.

The report calculated that for every £1 invested by the Foundation, there was a social cost saving of £7. Read it and you realise, this goes way beyond the remit of just another club ‘doing good’ in the local community. It’s a major investment and commitment to the health, wellbeing and future prosperity of some of London’s most impoverished wards. The audit specifically looks at the work of the Foundation in nine wards identified in the North Tottenham Regeneration Programme.

“When that report was finished and launched, it was not a time for everyone to sit back and say ‘look how great we are’,” Cornwell said. “The report highlighted that what we are doing is relevant and is appropriate for the area we represented. It was good to know that the Foundation is having an impact and making a difference.

“The Chairman and Board at Tottenham Hotspur fully buy into the Foundation. There is an acknowledgement that it is an integral part of this football club, where we use what is a valuable brand to go and do some pretty tough work with some of the most hard-to-reach people in our society. The Chairman and the Board have given positive support and encouragement for the Foundation to go out and do what it does.

“I have been here nine years now. We are the biggest employer in Tottenham. You can go all around the world and if you say you come from Tottenham, everyone will immediately say ‘oh, Tottenham Hotspur!’. As a club we have a huge responsibility to our local community and delivering life-changing opportunities to local people.”

Cornwell added: “Our stadium is a venue that is available to the local community 365 days a year. We open the executive boxes up on weekdays for people to have health checks, for example. The club is committed to investing the time, energy and commitment into its community work – from first-team player and director engagement, right through the fabric of the club.

“We are in one of the most deprived wards in the country. We have some of the highest rates of obesity and diabetes, unemployment through generations of families, some of the lowest levels of educational attainment – even though we have got some great schools. So building aspirations for young people are a focus for us, for example we are the first club to offer a Foundation degree. We set that up because we want kids who can’t usually afford it to still be able to have a University degree.

“All of this contributes to greater community cohesion. There are over 200 different languages spoken in this borough. With the postcode wars which are going on between kids from different areas, we know that we have got to build confidence and relationships right from the grassroots. It’s not as easy as saying ‘build it and they will come’. Getting a kid to go from an activity to a college programme, to University to a job, is not something you can say ‘we’ve got this so come and join in’; it takes time and a huge amount of effort, and really good quality, driven people. The engagement part of it is fundamental to making it work.”

The audit has also enabled the Foundation to better understand its place in terms of service providers to the local community.

“We have gone through a major re-evaluation and a lot of what we are doing is more than just sport. It’s just the Tottenham Hotspur brand is a catalyst for what we do. So for example we have our own Spurs nurse; a qualified health practitioner who is contracted to go out and do health checks mainly targeted at men, because a lot of men don’t go to the doctors.

“We were tasked with engaging with 45-year-olds plus, so we send the Spurs nurse in the Spurs tracksuit to Halfords, B&Q and all the other places where men might traditionally go to. She sets up the stand and engages with people, and we offer them a tour of the ground if they have a health check. Now we have done more than 3500 health checks, and we have found a percentage of those did need to go to the doctors and we have identified issues.

Cornwell feels there can sometimes be a “reluctance” outside of football to truly embrace the power of clubs in their communities – perhaps in part because of the omnipotence of the Premier League itself – and he hopes that new strategies from the Government and Sport England over the last six months, which have a greater focus on the social outcomes of sport as opposed to solely driving participation, will open up the sector to more genuine collaboration.

“The skillsets here are far beyond traditional football coaching. All of our staff are mentors and have a deep understanding of the risks associated with young people. We work with all of this borough’s looked-after children – at the last count there were 412. We have got some of the highest rates of teenage pregnancy, unemployment, domestic abuse and young people leaving school early. You look at the figures for children in care, they are horrendous and so we have focused on them for the last 10 years – not just the last 10 minutes. They are the most vulnerable in society.

“We are not going to change the world on our own so we work alongside many other services, and to properly understand some of these young people and work out if there is anything we can do as a football club, is a really powerful thing. What we do has to be user-led, it has to make a tangible difference. It has to be what this community wants and needs.”

Champions League football, England’s best young players, a new stadium taking shape and the Head Coach having just signed a new five-year contract; this is “an incredibly exciting time” for everyone involved with Spurs, both on and off the field, says Cornwell.

But when it comes to the club’s role in the community, he adds: “We want it to be real – not superficial – and the club are not superficial about any of this; we want this new stadium to be something for everyone.”

Made by Sport to distribute grassroots grants

Get marching for CP Sport