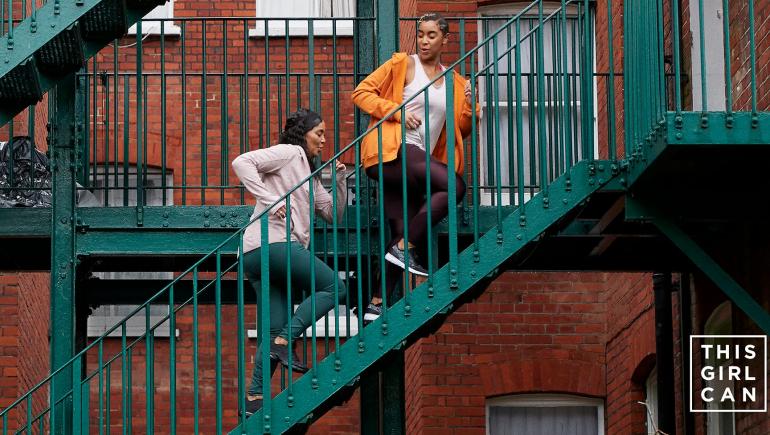 Sport England’s award-winning campaign ‘This Girl Can’ campaign was relaunched this week with a specific focus on tackling some of the taboos that can prevent women and girls becoming more active.

New research from the funding body says more than half of women stop exercising, at least occasionally, because they worry about what others think.

The survey of almost 2,000 women in England found that the majority believe seeing “slim-toned bodies” on social media has a negative impact on their own body image, while others found fitness influencers “unrelatable”.

The new campaign, launched on the fifth anniversary of the original ‘This Girl Can’, is designed to show the reality of women being active throughout menstruation, motherhood and menopause.

Hannah Johnson, 29, from Redbridge, Essex, appears in the advert exercising while on her period. Hannah suffers from debilitating period cramps, plus nauseousness and migraines. But she says transitioning from fearing the pain to using physical activity to manage it has been an “incredibly empowering process”. She’s seen clutching a hot water bottle before throwing it to one side and pulling on her yoga leggings – with a tampon string poking out of her underwear.

Patrice Bromley-Robertson, 24, from Haringey, London, appears in the ad using exercise to combat the symptoms she experiences due to polycystic ovaries, including irregular periods, cramps and weight gain. Since taking up HIIT, circuits and weight training, Patrice says her physical and mental health has improved, adding: “Exercise is my medication and motivation for life.” She enjoys working out alongside her mum, Yvonne, 54, who has been motivated to exercise to help manage her symptoms of menopause.

Kirsti Hau, 37, from Chorleywood, Rickmansworth, is mum to three children aged six, four and 10 months. In the ad, she’s seen breastfeeding before going out to play netball. Her advice to other mums worried about balancing exercise with parenthood is: “It’s all about taking small steps. You can start off by doing a few bits at home (on apps or watching YouTube) – that way you can build up the confidence. Once you’re ready, you can find something in the community with like-minded women.”

Lisa O’Keefe, Director of Insight at Sport England, said: “This Girl Can is about helping women feel confident, so they can overcome the fears about being judged that our research showed was stopping many from getting active.

“Since we launched five years ago, we’re seeing more relatable images in advertising and social media, but there’s a long way to go until women’s lives are being shown in a realistic way.”

Find out more at thisgirlcan.co.uk.

UKSDN Conference: The value of sport in prisons

BoxUp Crime expands
SIGN UP FOR THE CONNECTSPORT NEWSLETTER