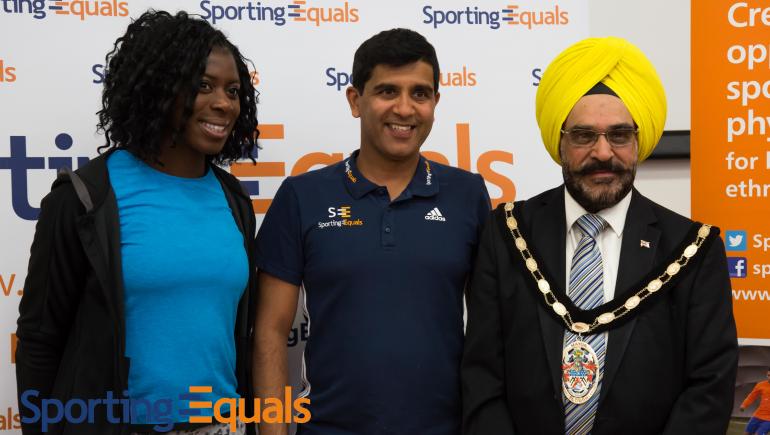 More than 70 young people from the town attended the project, which is designed to bring better understanding between different communities whilst also developing young people’s skills and confidence to become young leaders and make a positive impact in their community.

The #MakingEquals launch event took place at Slough and Eton College with a set of workshops for young people and community sport leaders on topics such as developing dialogue, cultural awareness and youth leadership. There were also active sessions including blind football to enhance communication skills.

The project is supported by the Postcode Community Trust, a charity funded by the players of People’s Postcode Lottery.

Ohuruogu, who won gold in the 400m at the 2008 Olympic Games in Beijing, said: “It was an absolute pleasure to meet the young people and talk about how sport has helped me so much in my career and how sport can be the catalyst to encourage social interaction.

“It is because of initiatives like this that I wanted to get involved with the work of Sporting Equals in the first place.”

The event was also attended by the Slough Borough Council’s Active Communities team as well as the Mayor of Slough, Paul Sohal. The Mayor said: “It was great to see young people come together through sport. It is important to have initiatives like this that promote integration, break down barriers and encourage community cohesion.”

Arun Kang, CEO of Sporting Equals, said “We have always felt strongly that sport has the power to bring people together and engage them positively with a common purpose, developing stronger and safer communities. That is why we developed Making Equals in Slough.

“It was particularly pleasing to see this project engaging and attracting girls, as well as the boys, to participate as they can sometimes shy away from sport and physical activity when it is not provided in an appropriate manner.”

To find out more about Sporting Equals, visit their Connect Sport directory page. To add your organisation to the directory, contact hello@connectsport.co.uk.

RESPONSIBALL to host major forum on sport and refugees