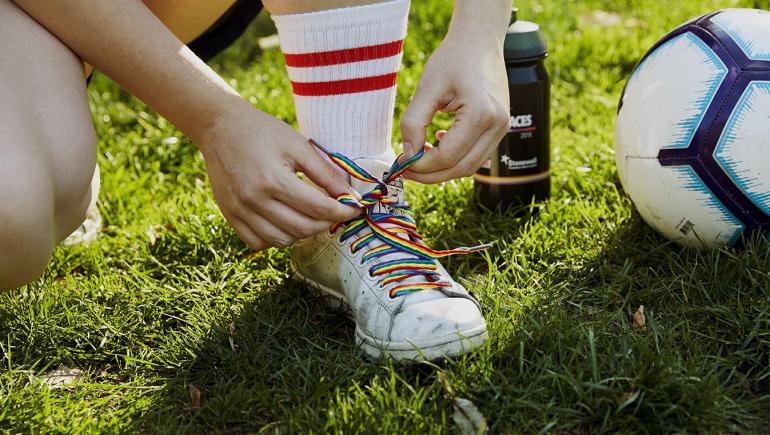 Back this month – bigger and brighter than ever before – the Rainbow Laces campaign is about to bring some extra colour to the wide world of sport.

That includes community organisations, clubs and teams, who are being encouraged to get kitted out with laces to show their support for LGBT+ inclusion. It all gets underway on the weekend of November 17 and 18, and runs into the first week of December. The FA, the Premier League, the EFL, the RFU, Great Britain Wheelchair Rugby and England Netball are just a few of the governing bodies that will be incorporating rainbows into their sports

Why is Rainbow Laces important? Now in its sixth year, the initiative aims to 'make sport everyone's game' and ensure every environment is comfortable, safe and welcoming for anyone who is lesbian, gay or bisexual, and for anyone who is transgender or non-binary.

In addition, homophobia, biphobia and transphobia can affect people who are straight and cisgender too; just look at some of the abuse that is directed at Premier League footballers online and in stadiums, for example. Allies – people who aren't LGBT+, but support those who are to be their authentic selves – have a big role to play, and their role also forms the central theme in the 2018 campaign activation.

ICM research for the charity Stonewall, which organises Rainbow Laces, found that around seven million people felt more positive about LGBT inclusion in sport after seeing the campaign in 2017, while around 4.8 million people said they would be more likely to challenge anti-LGBT language in sport as a result.

And it doesn't necessarily get better as you get older either; more than two in five LGBT people (43%) think public sporting events aren't a welcoming space for LGBT people (LGBT in Britain: Hate Crime and Discrimination, YouGov and Stonewall 2017).

Sports teams and groups that demonstrate that they are welcoming spaces for LGBT people – for example by wearing Rainbow Laces, or stating that they are inclusive in a club charter – are changing perceptions and helping to reduce any fear of discrimination. This grassroots engagement is one of the reasons why Stonewall and TeamPride, the group of businesses and brands that amplify the message which includes Sky Sports, Aviva and Barclays, picked up the Campaign of the Year Award for Rainbow Laces at the BT Sport Industry Awards in April.

So don't delay, get your Rainbow Laces today! You can buy individual pairs or get bulk orders at discount. You can also contact Stonewall directly to work with them on an activation; email sports@stonewall.org.uk.

Additionally, if you have got a story about being LGBT or a vocal ally in sport, why not share it and help to empower others? Sports Media LGBT+, the industry network that advocates for inclusion, is offering to assist individuals and clubs in getting these important stories out there in the media space. Find out more about this project on their website – if you are interested in sharing a story, drop them an email at info@sportsmedialgbt.com or a Twitter DM at @SportsMediaLGBT.