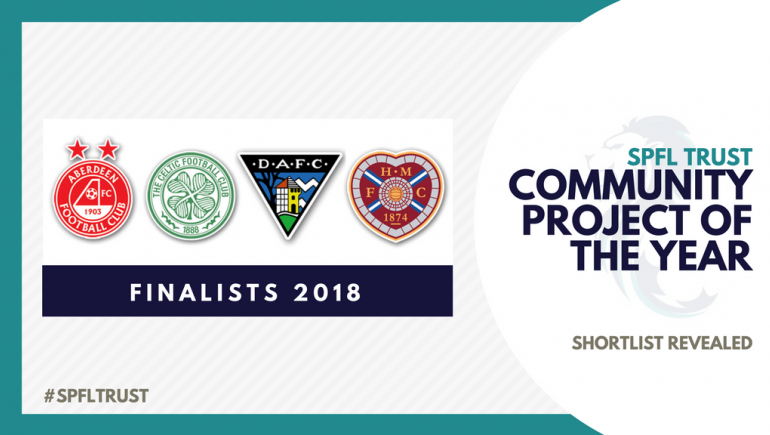 Aberdeen, Celtic, Dunfermline Athletic and Heart of Midlothian have been shortlisted for the SPFL Trust's 2018 'Community Project of the Year'.

The four-strong list will go down to a final vote of SPFL clubs to take place at the Trust’s annual All Club Conference on April 18.

Here are the contenders:

Dementia Friendly Wellbeing is the Aberdeen FC Community Trust’s programme of activity which supports people living with dementia and their carers to access physical activity sessions across the city. AFCCT’s approach means integrating people with dementia into services and the community, not providing sessions for those with dementia only.

Delivered by Celtic FC Foundation and funded by the Scottish government’s CashBack for Communities initiative, Celtic's Gateway to Employment is a bespoke employability project engaging young adults aged 16 to 24. The project targets individuals who have offended, are at risk of (re)offending, or live in an area with a high risk of crime.

Since the programme’s inception 163 participants have been engaged, 139 of whom have progressed into a positive destination including employment, training or education.

Delivered by the Pars Foundation, Dunfermline's shortisted project is called Pars Tackle Health. It promotes positive attitudes towards good health and fitness, using professional footballers – who visit schools across the area every Monday – as role models.

During this school year (2017-2018) the Pars will have visited 28 local primary schools and spoken directly to 1,133 Primary 6/7 pupils. This represents 71% of all primary schools in the Dunfermline area.

Hearts' project is Big Hearts Supporters and is led by Big Hearts Community Trust, the club’s official partner charity. It gives Hearts fans opportunities to give their time to help local families and individuals in need. So far over 1,700 fans have registered their support and 200 of them have volunteered in the community completing over 3,500 hours over the last 12 months to support a variety of initiatives across Edinburgh supporting socially isolated families.

Independent research conducted reported that 92% of volunteers would recommend volunteering through Big Hearts to others whilst the programme has been externally recognised, becoming the first football club charity in Scotland to achieve 'Investing in Volunteers' accreditation, and being shortlisted in the 'Cracking Campaign' category at the Scottish Charity Awards 2017.

Commenting on the shortlist, SPFL Trust chief executive Nicky Reid said: “We are delighted to reveal this shortlist of four very different projects which support a variety of key areas of need in Scotland: dementia, health and wellbeing, social inclusion, and volunteers supporting socially isolated families.

“Once again, we see why our clubs are trusted to support people who are in need across the country, delivering meaningful engagement."