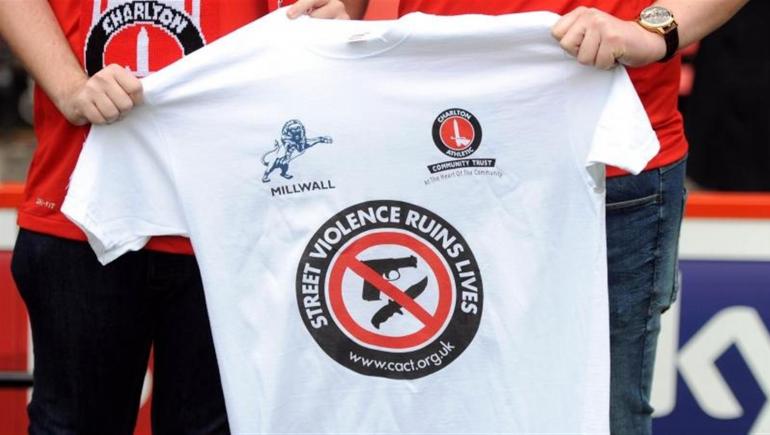 The project is run in partnership with a range of key stakeholders, including the Mayor of London, Royal Borough of Greenwich, Peabody Trust and the Metropolitan Police, and has seen CACT engage with over 2,000 young people.

The club has had a dedicated SVRL matchday since 2009, when Charlton and Millwall came together for the first time following the deaths of Addicks fan Rob Knox and Lions supporter Jimmy Mizen in 2008.

Speaking to Sky Sports about the SVRL campaign, Deji said: “I think for someone like me it’s very important. To show that the club have done that, it’s great from them.

“As someone that has come from an area where obviously there’s a lot of gang culture, a lot of street violence where I grew up, I think it’s top from the club as well, sticking that initiative in and trying to better people’s lives.”

Paul Robinson, CACT’s Crime Reduction/Mentoring Manager, added: “Our SVRL programme has been running for 12 years, it started with the sad loss of Rob Knox who was an avid Charlton fan. We have mentors who are highly skilled who work with vulnerable people who are referred to us by different statutory partners.

“Deji’s support for the SVRL programme has been really good, he’s spoken about mentoring young people with us too which is excellent.”

To find out more about Charlton Athletic Community Trust, visit its page on the ConnectSport directory. To add your organisation for free, contact hello@connectsport.co.uk.

Patients could be prescribed paddleboarding
SIGN UP FOR THE CONNECTSPORT NEWSLETTER