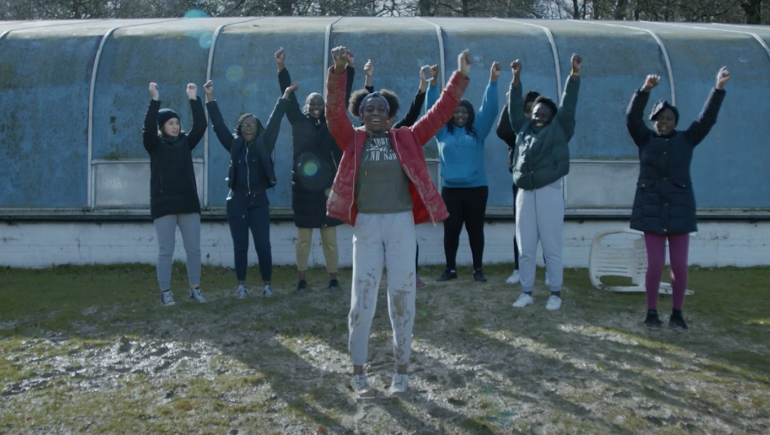 The collaborative project saw Champion, the sportswear brand, help to bring together 20 youth organisations and more than 300 young women and girls from across the capital.

Over the last year, participants benefitted from weekly sport and physical activity sessions, and led social action projects focused on mental wellbeing and female empowerment. Around 100 of them also attended a residential in East Sussex at the end of February, when the film was created.

Afterwards 84% of the organisations involved reported that the programme had enhanced their weekly offer to young women and girls, with 81% of participants stating they felt more positive about sport and physical activity than 12 months previously and were committed to continuing being physically active.

The project also helped to develop 40 new female community sport role models, who received a variety of qualifications – including mental health awareness training – and were upskilled to lead sports sessions to sustain activity.

Champion Girls was funded by the Greater London Authority, via the Active Londoners strand of their Sport Unites strategy with partnership funding and resources provided by Champion.

London Youth's Sports Development Manager John Jones explained: “At London Youth, we work with and through youth and community organisations to challenge and remove the barriers young Londoners face to fulfilling their potential.

"Our Champion Girls programme was a direct response to the inequalities faced by Black, Asian and Minority Ethnic girls and young women in terms of sports participation. Whilst we recognise there is still more to-do, we are very proud of the girls and young women and how they’ve reignited their passion for being active.

"I’d also like to reference the crucial role of the female youth workers. As sports coaches and mentors, they’ve been the safety net and springboard required by the girls and young women.”

To find out more about London Youth, visit its page on the ConnectSport directory. To add your organisation for free, contact hello@connectsport.co.uk.