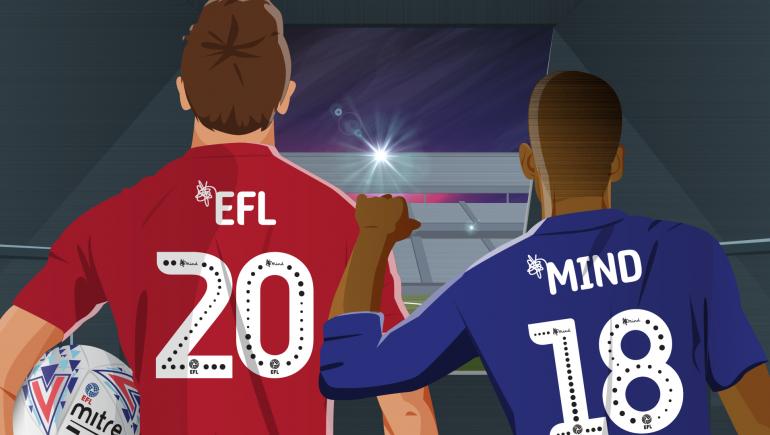 Mental health charity Mind have launched a new partnership alongside the EFL in order to increase awareness of mental health and help raise funds to deliver life-changing support.

Named 'On Your Side', the partnership will mean the charity’s logo will feature in names on the back of every EFL shirt across all 72 clubs in the Sky Bet Championship, Sky Bet League One and Sky Bet League Two this season.

With over 18million fans attending EFL matches each season alongside millions more watching on TV, Mind and the EFL hope that the increased visibility at matches will promote awareness and understanding among new audiences.

Through the partnership, Mind will also be working directly with EFL football clubs and their community trusts to improve mental health support within the clubs and their wider communities.

This is part of a growing movement of sport and mental health working together to improve the approach to mental health in society, after Mind was chosen to become the EFL’s official charity partner from the start of the 2018/19 season for two years.

The Scottish FA launched a new Mental Health and Wellbeing League earlier this year, while a number of other clubs have been running programmes after the success of Mental Health Awareness Week in May.

"That could be one person in every family, hundreds of football players and many thousands of football fans. By coming together to tackle mental health Mind and the EFL can be game-changers.

“Incorporating an iconic part of Mind’s logo on the shirts of all 72 EFL clubs is just the start of achieving real change by raising awareness and understanding of mental health in football, sport and society as a whole.”

EFL Chief Executive Shaun Harvey added: "The launch of the new ‘On Your Side’ partnership will not only start to raise much needed awareness about mental health across a number of key constituents but also make a significant step forward in how society approaches the varying degrees of mental health issues.

"A big part of our partnership is showcasing the work on a national and international platform and this will primarily be achieved through the introduction of the Mind names and numbers on every players’ shirt in our competitions this coming season."