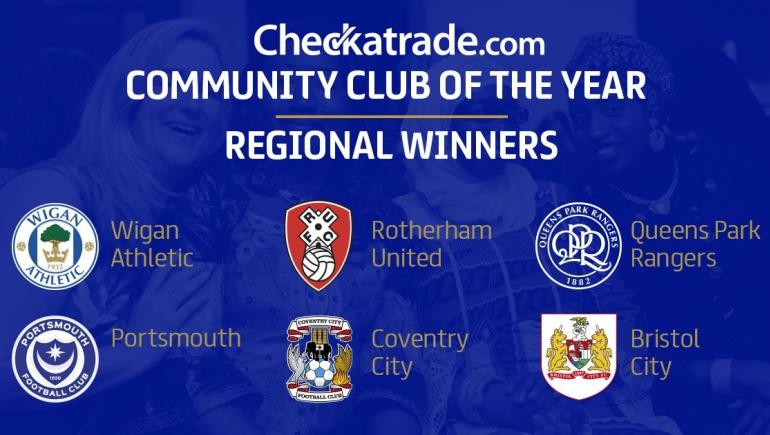 Six clubs from the English Football League (EFL) were recognised in Parliament this week for their outstanding work in the community.

As regional winners of the Checkatrade Community Club of the Year, they were selected for their innovative and groundbreaking work across inclusion, community engagement, education and health.

The overall winner of the 2019 Checkatrade Community Club of the Year Award will be announced at the EFL Awards on April 7 in central London.

EFL Chief Executive Shaun Harvey said: "This event gives us the opportunity to highlight the work of the top clubs in each of the regions and we should never underestimate the amount of work that is going on in all our community trusts.

"Football is a vehicle to open many, many doors and actually at local community level it opens even more."

The EFL received submissions from a wide range of clubs with the panel marking the applications on social impact and their showcase projects. The six regional winners were selected by an independent judging panel including The Times’ Chief Football Writer, Henry Winter; Clive Efford MP; Director of Corporate Social Responsibility at The PFA John Hudson; The Daily Mail’s Laura Lambert and the EFL Trust Director of Operations, Mike Evans.

The 2019 regional winners are:

'Building Stronger Communities' – United impressed the judges with their response to their town’s priorities, focusing on anti-social behaviour, youth offending, health and community cohesion and integration. Rotherham’s ‘Building Stronger Communities’ project, funded by the Ministry of Housing, Communities and Local Government (MHCLG), was viewed as stand-out, and focused on improving the lives of individuals in the community, based around the themes of English language support and cohesion.

'Pathway 2 Participation' is a mentoring project working with some of the most vulnerable young people in Wigan and focusing on one of the top 10% deprived neighbourhoods in the country. The project helps young people and works hand in hand with a range of supporting agencies including schools, youth justice agencies and mental health services to help them through the challenges they face.

'Turn2Us' is a school holiday programme that offers families with children, who receive free school meals during term times, the chance to maintain a healthy diet throughout the year. Operating in an area of high deprivation, the community team welcome children several days a week, providing meals, activities and workshops for their families.

QPR's continued support for the individuals in their community in the wake of the Grenfell Tower disaster has created a stand-out project, using therapeutic interventions to support primary school children directly or indirectly affected by the tragedy in 2017.

Portsmouth impressed the panel with their ongoing innovative work for a wide range of individuals in their community - their youngest participant is three and their oldest 101. Their groundbreaking project, based on a restorative justice approach for young fans involved in violence at Portsmouth games, was especially lauded by the judges.

Bristol City’s education and employability projects and outcomes impressed the judges. The environment created for learning and the commitment of the team to support students beyond their learning experience proved a stand-out to the panel. The ongoing work of their Youth Council also continues to impress and highlights the importance and potential of young people in our communities.

Law: Inner-city facilities can build 'better citizens'
SIGN UP FOR THE CONNECTSPORT NEWSLETTER