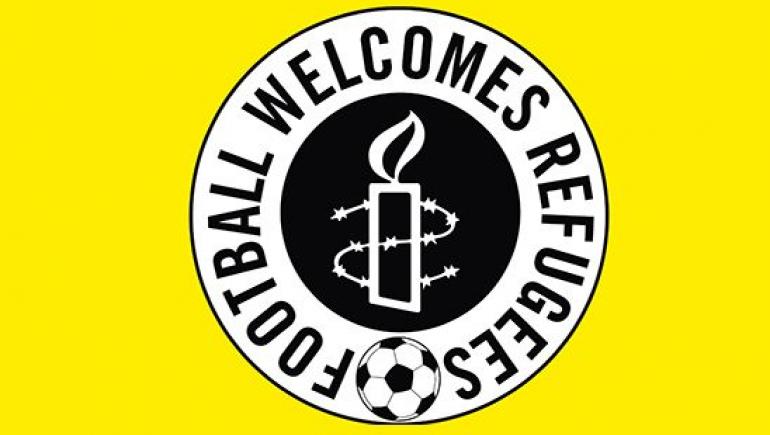 Soccer clubs across the UK will unite to celebrate the contribution that refugee players have made, and continue to make, to the sport this weekend as Amnesty celebrates its annual ‘Football Welcomes’ campaign.

From the children fleeing the Spanish Civil War in the 1930s who went on to become some of the first refugees to play professionally in the UK, to the likes of Granit Xhaka, Nadia Nadim and Victor Moses in more recent years, refugee players have been making their mark on football for decades.

Over the weekend of April 27-28, clubs from the Premier League and Women’s Super League to grassroots teams across the country will put on events and activities to welcome refugees and people seeking asylum in their communities. Some will be offering free tickets to a game and some will organise a match or tournament or arrange a stadium tour, among other activities.

Last year, 60 clubs participated in the Football Welcomes weekend, including over half the Premier League and teams from the FA Women’s Super League, English Football League (EFL) and Scottish Premiership.

Meanwhile, in Norfolk, 61 local schools and nearly 20,000 children participated in ‘Norfolk Welcomes – Football Welcomes’, when normal lessons were suspended and the children spent the day learning about migration to East Anglia and the role that football can play in welcoming refugees.

Find out where activities are taking place during Football Welcomes using the map below.

Former Everton winger Pienaar explained: “I was born in apartheid South Africa and I know how sport, including football, can help to bring people together and break down barriers. I’m really proud that Everton is taking part in Amnesty International’s Football Welcomes weekend.”

To find out more how you and your club can get involved in Football Welcomes, click here.

The projects fighting to get girls active