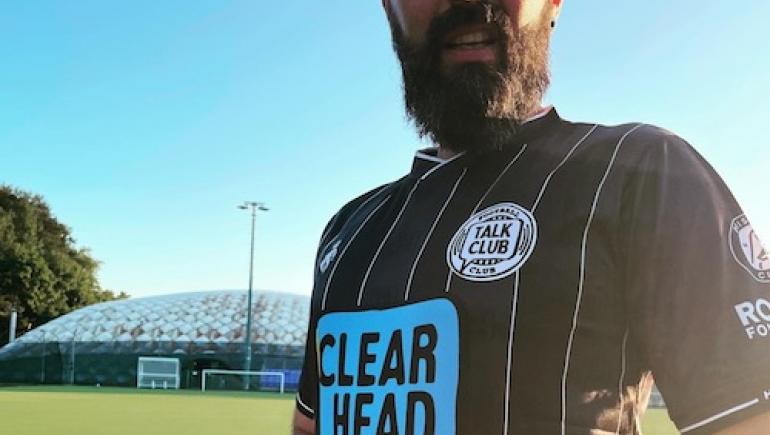 Bristol’s two football clubs may be fierce rivals on the pitch – but they have come together off it to support a male mental fitness charity based in the city.

The charity ‘Talk Club’ aims to get men talking openly about the challenges to their mental health, and to help raise funds and awareness, this week it launched a stylish limited edition football shirt (pictured above) supported by both clubs.

The shirt is being sponsored by the Bristol Rovers Community Trust and Bristol City’s Robins Foundation, with a logo from each club’s foundation on its sleeves.

Funds raised from the shirt will support the charity’s project ‘Talk Club FC’ which combines football and feelings. It begins with the ‘Talk Club Check-in’ which asks how participants are faring out of 10, before taking part in a football session, and checking out with another number out of 10.

Ben Akers, Co-Founder of the charity, explained: “We created Talk Club to get men talking so they can become mentally fit. So creating a shirt that starts a conversation has got to be a win. We're all on the same team in the fight against men’s mental ill health and we should all be United in mental fitness.”

Fittingly the sponsor on the front of the shirt is ‘Clear Head’, which is a non-alcoholic beer brewed locally and aimed at promoting mental wellbeing, while the kit is made from 16 recycled plastic bottles – meaning it’s not only good for local people but the planet too!

“We are honoured to see the clubs branding represented on the shirt sleeve. As a football club we recognise that mental health knows no colours and are delighted that Bristol City have also joined us in supporting this life-saving charity.”

Dan White, CEO of Bristol City Robins Foundation, added: “We are delighted to partner with Talk Club on the Talk Club FC project.

“Good mental health is important for everyone no matter your background, so it’s great that Bristol’s two professional football club charities are once again coming together to support such an important initiative. We are looking forward to see the partnership grow over the coming season.”

Click here to find out more about Talk Club FC