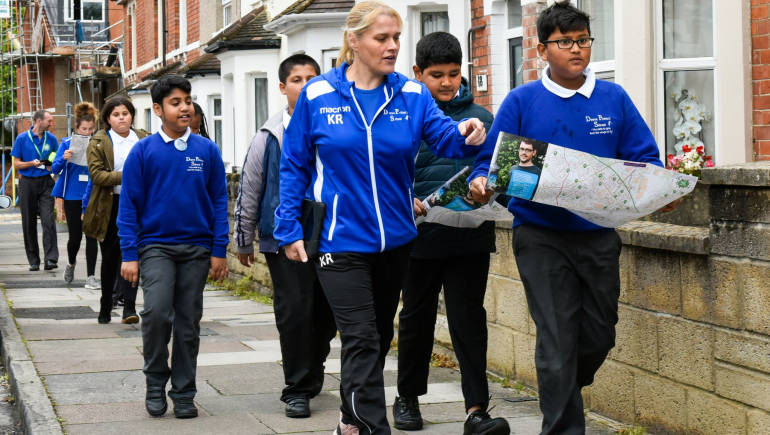 The latest instalment of Sport England’s initiative 'Beat the Street' has hit the Wiltshire town of Swindon, with an estimated 20,000 people expected to be involved during its six-week duration.

The scheme, run by Reading-based Intelligent Health and funded jointly by Sport England and Swindon Borough Council, transforms an area into a game where people can earn points by walking, running or cycling.

Each person is given a card or fob which they place on sensors attached to lamposts or other pieces of street furniture – of which there are 170 across the town – and these measure the number of miles achieved.

“We are incredibly excited to be launching this new set of programmes with Sport England, which will encourage more than half a million people to become active over the next three years,” said the CEO of Intelligent Health, William Bird.

“The game in Swindon has already got off to a strong start, with more than 4,000 walking and cycling as part of Beat the Street within just the first 12 hours of the game.

“With over 100 teams on the leaderboard, we urge everyone in Swindon to pick up a card and give the game a go.”

Councillor Brian Ford, who is the lead member for health for the Council, told the Swindon Advertiser: “Beat the Street is important because we have a huge amount of obesity in Swindon.

“We have lots of programmes in the town to deal with lots of different issues. But most of them deal with 20, 30, 40 people at a time.

“That’s why I’m really pleased with this programme we’re starting. We can make a difference.”

Previously the scheme has been held in Nottingham, Belfast, East London, Torbay, Gloucester and Bradford, with 125,000 people taking part in the first half of 2017.

Swindon is the first area to benefit from £3.3million of National Lottery funding, which will support the launch of Beat the Street in a further 59 towns and cities across the country.

Mike Diaper, Director of Community Sport for Sport England, said: “By getting people outside, socialising and exploring their local area, Beat the Street makes being active fun, no matter how fit you are.

“It’s just the kind of innovative project Sport England is proud to work with as part of its strategy 'Towards an Active Nation'.”

The initiative also lowers the use of cars in an area. In the six Beat the Street games that took place in 2016, more than 736,486 kilogrammes of CO2 emissions were saved – the equivalent of taking 144 cars off the road.

Show your support for 'Parents in Sport Week'

Clubs unite for mentoring scheme
SIGN UP FOR THE CONNECTSPORT NEWSLETTER