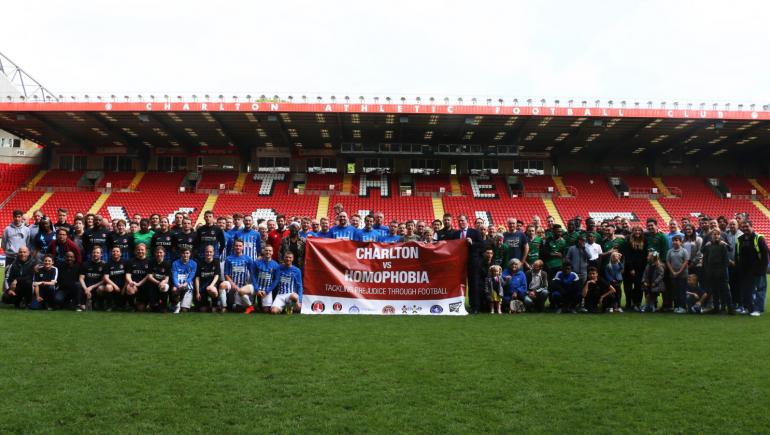 The third annual Charlton v Homophobia tournament to help the raise profile of LGBTQI+ football will feature more teams than ever before.

For the first time, an RAF representative team and a team of journalists will join the event on May 22, which is held at The Valley in association with Proud Valiants and the award-winning Charlton Athletic Community Trust.

Two-time champions the University of Greenwich, Fans For Diversity, Proud Valiants (the official supporters' group for LGBTQI+ fans) and CACT Invicta (the first LGBT-friendly team to be affiliated with a football club trust) make up the six teams. Entry is free for all supporters.

Flight Lieutenant Scott Hyndman of the new RAF team said: “We are delighted to represent the Royal Air Force at the Charlton v Homophobia tournament. As a Service we have faced our own challenges in the past with regards to the inclusivity of LGBT personnel, but in recent years we have made much progress, primarily by raising and challenging issues surrounding homophobia.

"Football is very similar in terms of the challenges it faces and we believe that no matter your sexual orientation, football is a sport for all and everyone should feel welcome within the game.”

Sky Sports journalist Jon Holmes, who will play on the team representing national, regional and local media, said: “We’re delighted to have been invited to step out of the Valley press box and onto the pitch, particularly for a tournament with such an important theme.

"As a club and as a community trust, Charlton continue to demonstrate clearly that LGBT+ people are welcome and valued in football - and that’s a message those of us in the media must always participate in communicating too.”

Fans for Diversity Campaign Coordinator and former pro Anwar Uddin, of the Football Supporters Federation, said: “It’s amazing that a club the size of Charlton opens its doors to the community and allows fans the opportunity to play in the stadium under the lights. We have had well over 100 fans request to play for the Fans for Diversity side so we are looking forward to what will be a great night. For me the best thing about football is that it brings people together and this is a fine example of that.”